For it will be like a man going on a journey, who called his servants and entrusted to them his property. To one he gave five talents, to another two, to another one, to each according to his ability. Then he went away.

Several years ago I asked my friend Frank if I could use some of the wood in his barn to build a table for our church. Although he wanted the wood for some future undetermined project, he hadn’t done anything with it yet, and so said “yes.” Why? In Frank’s words, “It will be good to get it into service.”

Frank thinks this way. He has a fair amount of land, a large but modest house, and a shop full of tools in his garage. The number of things I have borrowed from Frank over the years is legion—from books to post-hole diggers to his truck and trailer. He and his wife regularly open their home for gatherings of various kinds. They offer their guest rooms to people, long 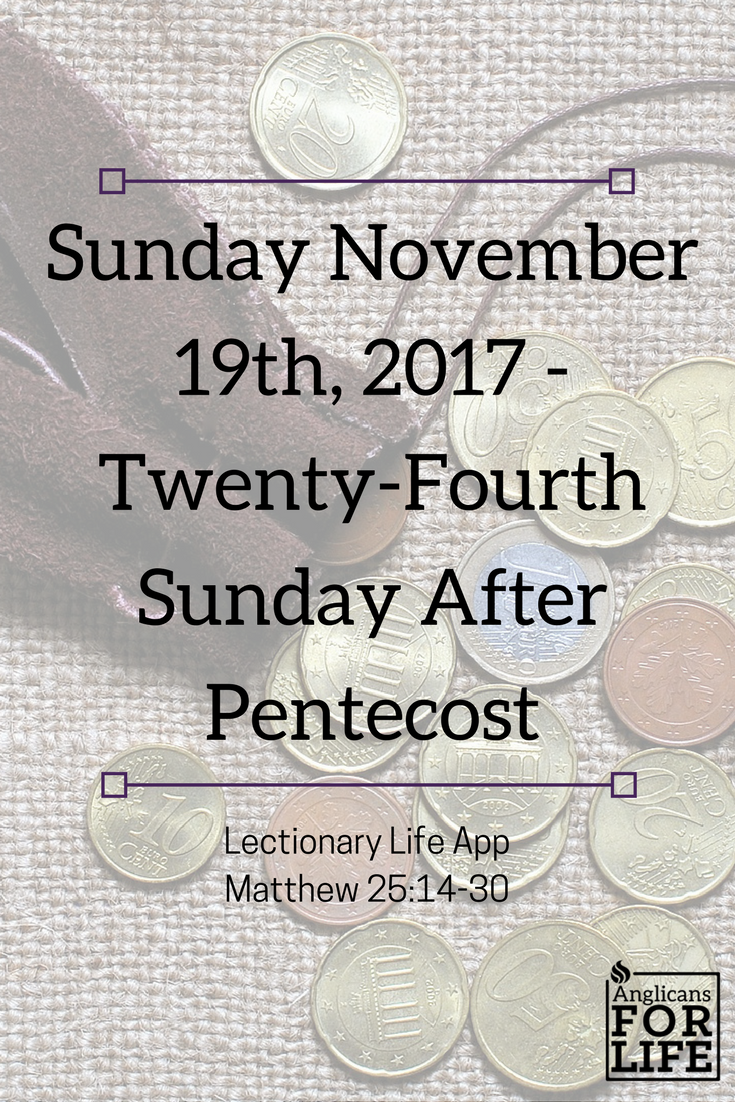 or short term. Several years ago they moved and rebuilt their kitchen to support their hospitality. Frank holds what he owns with a loose hand, because in the end he knows he doesn’t own anything. Rather, he has been entrusted with what is God’s. Frank is not an owner. He is a steward.

Which is precisely the point of Jesus’ parable in Matthew 25:14-30. The reason that the stewards who wisely invested the master’s money were commended is that they realized that they had been given a trust, and were therefore to use it to further the master’s purposes. The reason the one who buried the talent is condemned is that he did nothing. He didn’t “get it into service.”

God has blessed his church with great gifts, which He intends to be used to bless others, particularly those in need. Understanding this is crucial, for to serve well in a culture where vulnerable women are encouraged toward abortion requires us to hold our resources with an open hand. Our money, for babies are expensive. Our homes, for some women will need a place to live, perhaps for a significant time. Our time, for some in crisis pregnancy are afraid and alone. Our connections, for some will need a job to make ends meet, and others will need childcare so they can continue in school or work. In the end, this kind of service requires our availability, in the varied ways it may be called for. To serve well will require many of us to reorient our thinking, recognizing that we are not owners, but stewards. What do we have that we might get into service?

There is also another reason we need to think in this way. If we pause to consider, in asking a woman in crisis pregnancy to carry her baby to birth, we are in effect asking her to consider that her body is not her own. And that is a weighty matter. One of the cardinal arguments used to argue for abortion rights is that a woman’s body is her own, and therefore no one should presume to tell her what to do with it. While pro-lifers may rightly point out that there is more than one body involved, let’s stop to acknowledge the force of the objection. A woman’s body is not separate from who she is. Her “body” does not carry her unborn child. She does. Regardless of the circumstances surrounding a pregnancy, every woman not only carries the baby, but supports and nurtures him. She carries him as a mother. Pro-life people are asking a woman to make herself available to the little one she carries—one now entrusted to her—for at least the nine months of pregnancy, and often for a lifetime afterward. We are asking her to see herself not as an owner—even over herself—but as a steward.

If we ask her to do that, we had better be ready to make ourselves available in smaller ways as well.