Burning the Evidence – Abortion Clinics, Stericycle, and the Remains of the Unborn

While this is an important matter to read about, what is shared here could be disturbing and upsetting. There are no graphic images, but the treatment of the remains of aborted children is discussed.

In my early teens I developed a long-lasting obsession with Agatha Christie. I’ve collected and read many of her famous whodunits and even solved a few of them. So as a self-proclaimed 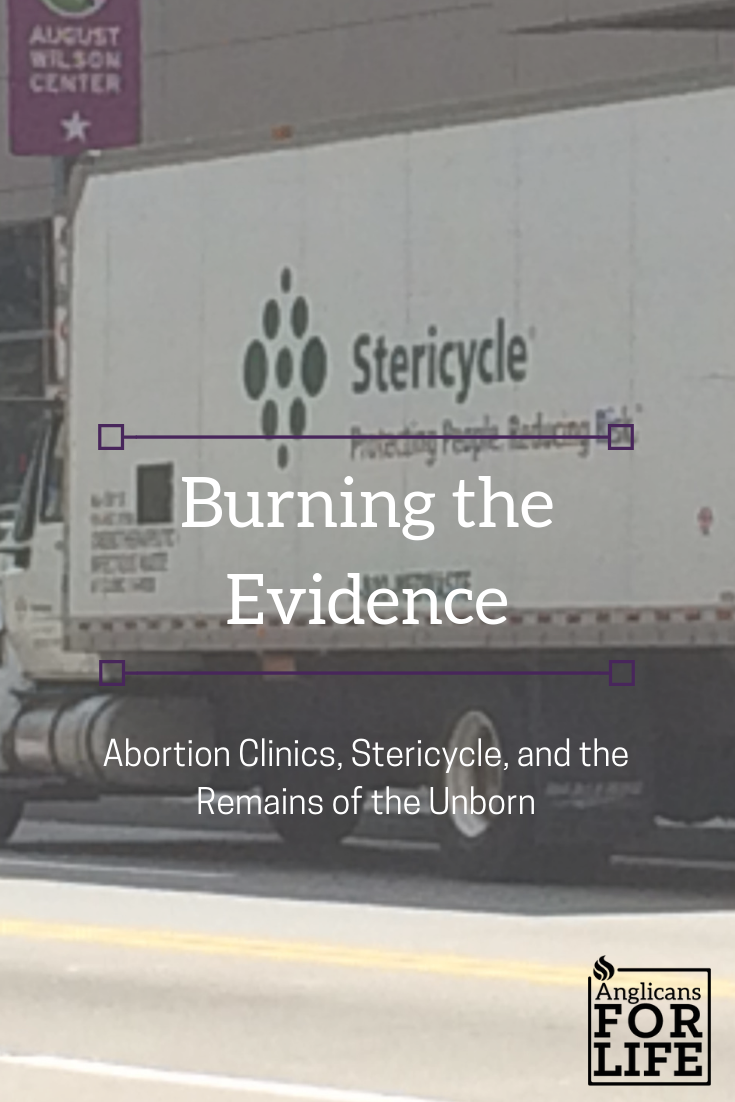 Christie expert, I can say that the one thing that unites all the murderers in all her books is a desire to get rid of the evidence of the crime, be that a piece of clothing, a letter, or even a witness. Send it away, discredit it, destroy it—because only when evidence is found can there be a conviction, a way to prove guilt.

I wish I didn’t see an abortion connection to my beloved mysteries, but I’m sad to say that I do. Much like Christie’s fictional killers, abortion clinics face a similar conundrum. How do they rid themselves of the evidence of their trade? And, oh, do they have ample evidence to dispose of – according to the World Health Organization, 3,000 babies are aborted in the United States—every day. That’s an incredible tragedy for us to know and comprehend. But abortion clinics, who aren’t concerned about sanctity of life, have to think of the practicalities of that number. After all, “a small clump of cells” is a lot bigger than it sounds. In fact, one abortion provider, Renee Chelian, was caught on tape at a conference talking about her struggles with removing infant remains. At one point she had five months’ worth of unborn baby remains in her freezer, and she jokingly said she was contemplating taking them out in the woods and having a bonfire. “We are one incinerator, one incinerator company away from being closed,” she said. Why? Because the remains of aborted children are evidence, in and of themselves, of the horrific wrongness of abortion.

Which brings us to the money-makers of this desire to get rid of the evidence—bio-waste companies such as Stericycle. Officially, Stericycle has a company policy of not picking up or disposing of the remains of aborted children but does serve various abortion clinics, including Planned Parenthood. In 2017, Stericycle made headlines for cutting ties with hundreds of abortion clinics, because abortion providers could not certify that fetal remains were not mixed in with other garbage (please stop and think about that sentence—they could not guarantee that unborn children weren’t mixed in with other garbage).

While the company publicly reaffirmed its commitment to not transporting fetal remains, Stericycle has since proven that business is more important than company policy. Several times in 2017, pro-life group Created Equal volunteers observed clinic workers taking biohazard containers from an abortion clinic in West Columbia, SC and bringing them to a gas station for pick up by a Stericycle driver. While the report did not detail what was in the biohazardous containers, there is little mystery about that. Stericycle was fined in July 2018 for violating South Carolina infectious waste law. The report also noted that “a former transportation supervisor had agreed to accept waste at an alternative location at the request of [the clinic]” and that “Stericycle drivers were retrained” after that.

While retraining may have taken place, an actual change to Stercycle’s business procedures has not. A former Stericycle driver has submitted his testimony in March 2018 to Created Equal, a group whose Weak Link Project seeks to uncover the truth of unborn body disposal. This is from his written testimony:

Much to my surprise and disgust the lady walked over to the freezer and took out an aborted baby that was in a clear plastic bag. She placed it in a red bio hazard bag, then prepared a box to ship it. It was very apparent that is was a baby. I was so surprised at how mature it was…I just recently learned in a compliance meeting that Stericycle does not accept fetal remains, or so that’s what the “Rules” are. I can definitely attest to the fact that it was a baby.

I resigned from my job for reasons being that we were told to turn a blind eye to the fact of what we were really picking up. I also learned that there was a very real danger of being personally liable involving thousands of dollars in fines. When I asked [his manager] about what was going on he stated, “There’s a lot of money in burning babies”.

And that’s really it, isn’t it? “There’s a lot of money in burning babies.” Stericycle breaks the rules and runs the risk of being fined—because it’s profitable to dispose of the remains of aborted children. And because abortion clinics need to distance themselves from fetal remains to hide the extent of their crimes, they will pay the price. And because frightened women—in bad situations or relationships, who need to remove the evidence if not the source of their problems—continue having abortions, they too will pay a price, literally and spiritually. And so the terrible cycle continues.

What can you do about this? Be a witness. See the evidence. Share it with others. If people were more aware of the disposal process, they may be more willing to think about what—or, more importantly, who—is being disposed of, and other bio-waste companies may cut off their ties from abortion clinics due to public backlash. And when there’s no one to pick up the remains…what will abortion clinics do then?

Silence is what abortion clinics and waste removal companies like Stericycle depend upon. May we continue to be witnesses to this truth—that the remains of an unborn child shouldn’t be a means to make profit. They are evidence of sacred, God-created life.