The Business of Bribery: The Curse and the Abortion Industry

‘Cursed by anyone who takes a bribe to shed innocent blood.’ And all the people shall say ‘Amen’ (Deuteronomy 27:25).

It is hard to imagine anyone objecting to the Old Testament forbidding bribery in the service of murder. One would think that such a law would be axiomatic in any free society. 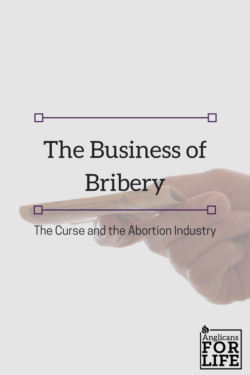 When an abortionist is hired to kill a child, what is that but taking a bribe to shed innocent blood?

Any doubt that abortion is rooted in bribery should have been dispelled when the undercover interviews with Planned Parenthood were released. That there is money to be made by abortion was not news. What was news to many were the various ways money is made by abortion. Thinking herself behind closed doors, one particular abortionist stated matter-of-factly that if you kill the baby in one way, there is less money to be made (perhaps only the fee for the abortion itself), but if you kill the baby in another way, ensuring for instance an intact heart or liver, or an undamaged head, then more money can be made. The businesslike manner in which those in the abortion business spoke of fetal body parts and budget line items, and the care they took to kill babies in a particular way to fulfill specific orders, showed they know exactly what they do and the reasons that they do it. In other words, the abortionist is persuaded to act by a promise of money.

Some will object that we are not talking about bribery at all, for a bribe calls for that which is illegal or dishonest. That the discovery of practices both illegal and dishonest in abortion clinics has gone largely unaddressed reveals a simple fact: we have turned a crime into a business.

But we can go further. We have turned a crime into a charity. For example, I can give money to the International Justice Mission, which exists to rescue the vulnerable from oppression and death, and to Planned Parenthood, which kills the vulnerable, and receive a tax benefit for both donations. Apparently, we fail to see the difference between organizations that rescue children and those that kill them.

And we can go yet further. We have turned a crime into a right. Whereas charity is something that is given, rights are something to which we are entitled. Herein lies the rationale for taxpayer money being spent for abortion. If abortion is defined as healthcare, and healthcare is determined to be a basic human right, then it follows that the government would seek to make it available, even at taxpayer expense. This is one reason why Planned Parenthood continues to receive federal money.

To return to the Old Testament passage above, it is telling that the people are required to say “Amen” after the curse is pronounced. The “Amen” is in effect an assent by the people of God—“we have heard, and we agree.” Unfortunately, one of the reasons—I suspect the primary reason—that we live in a land that protects and promotes bribery for blood is because the Church as a whole has not been clear about what abortion is. Too many of us have either bought into the idea that abortion is a good, that abortion is a right, or we have simply decided that it is not all that important. But as the passage above makes plain, the Lord does not permit diversity of opinion on the shedding of innocent blood. The corporate “Amen” does not allow for it.

But in Christ, the “Amen” of the Church means something else as well. There is forgiveness in Christ for abortion—for the abortionist, the clinic worker, the politician promoting unjust laws, the mother and father of an aborted child, those who enabled or encouraged an abortion, those who are silent, and those involved, either actively or passively, in a myriad of other ways. Galatians could not be clearer: “Christ redeemed us from the curse of the law by becoming a curse for us—for it is written, ‘Cursed is everyone who is hanged on a tree’” (Galatians 3:13). We live in a world that is weary and heavy-laden due to the sin of abortion, but it will never admit as much unless it is plain that Christ came into the world to save sinners, and including those who have been involved in abortion. In other words, the world will never be able to see abortion for what it is until it sees Christ for who He is, the one who became a curse for us, that we might be forgiven and freed, and know the blessing of God in Christ. Herein lies the good news, the final “Amen” of the church, to a world desperately in need of God’s word of grace.