Most who read this will know that 2-year-old Alfie Evans, who suffered from a mysterious neuro-degenerative disease, died last week, the UK Supreme Court having ordered life support be removed and, despite the desires of Alfie’s parents, forbidding him to receive treatment elsewhere. Now Alfie’s parents are grieving, and the rest of the world debates the rectitude of the Court’s decision.

Let’s agree that sometimes medical decisions, particularly when they 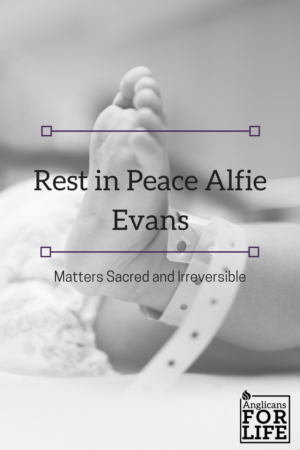 involve end-of-life matters, can be difficult, and all the more in an age when medical technology has given us choices unavailable in previous ages. How then can we assess the basic rightness of decisions in these kinds of matters?

We can look at the language.

I am not a lawyer, but I can read and understand plain English. The following are a few simple observations and reflections upon the text of the UK Supreme Court’s ruling.

Let’s begin with the use of the passive voice. Consider the following sentences:

It had been decided, after careful examination of the evidence, that it was not in [Alfie’s] best interest for the treatment which sustained his life to be continued . . . (paragraph 4).

It has been conclusively determined that it is not in Alfie’s best interests, not only to stay in Alder Hey Hospital being treated as he currently is, but also to travel abroad for the same purpose (paragraph 13).

The passive voice is not simply a different way of saying something. It removes the subject of the verb. In the sentences above, the passive voice hides exactly who has made the decisions that affect Alfie’s life. In other words, by leaving unanswered who decided and conclusively determined Alfie’s best interests, the passive voice conceals, ironically making plain the Court’s reluctance to assign responsibility for its decision.

When the Court does address responsibility (how could it not?), it continues to do so in language not meant to reveal, but to conceal. Consider further the following two statements:

The decisions of the trial Judge clearly amount to decisions that the parents have no right to direct Alfie’s future medical treatment (paragraph 9).

Every legal issue in this case is governed by Alfie’s best interests. These have been conclusively and sensitively determined by the trial judge (paragraph 14).

The first line above is remarkable in its obfuscation—“the decisions of the trial judge clearly amount to decisions. . . .” Why not simply “The trial Judge decided that Alfie’s parents have no right to direct his future medical treatment”? Not only is this sentence more concise, it states plainly what is at stake. The passive, indirect language serves to soften what is a very bold claim on the part of the Court. Or, for the second line, why not “The trial Judge has determined what Alfie’s best interests are”? The answer is obvious—stating the matter plainly would run the risk of it being understood.

Let us move from the passive voice to the choice of wording. Consider the following sentences, partially quoted above:

The decisions of the trial Judge clearly amount to decisions that the parents have no right to direct Alfie’s future medical treatment. This is not a criticism of them. How could it be? It simply means that they cannot take Alfie away from Alder Hey for the purpose of transporting him at some risk to other hospitals which can do him no good (paragraph 9).

After the Court assures us that they are not being insensitive or critical of Alfie’s parents (whether that is true, or why it even matters, is another question), we are assured that the ramifications of denying Alfie’s parents’ rights are modest—the denial “simply means” that they cannot transport Alfie from the hospital. Leaving aside the ridiculous claim that transporting Alfie would carry “some risk” (surely they can’t mean a risk that Alfie would live?), the suggestion that this case is about simple movement and risk management is a massive obfuscation. The case is about Alfie’s death.

This kind of euphemism-speak continues:

It is not lawful, therefore, to continue to detain him, whether in Alder Hey or elsewhere, for that purpose. The release to which he is entitled, therefore, is release from the imposition of treatment which is not in his best interests (paragraph 13).

Here the Court describes Alfie as a boy on the move, one being unjustly detained. Aside from the irony that the Court required the hospital to detain Alfie, the question arises—detained from what? The answer, of course, is death, a word that curiously does not appear in the text. Furthermore, note here how the Court frames the issue. According to the Court, Alfie’s case is not about a right to life, but rather a right to release—a release to which (note the word) he is entitled. A release to what? Again, death. Pardon the clarity here, but the Court is ruling that Alfie would be better off dead, but refuses to say so in plain English. Language of journeys and destinations and release are not nearly so jarring.

None of this is new. In his 1946 essay, “Politics and the English Language”, George Orwell described well the kind of writing we see in the Court’s decision:

. . . political speech and writing are largely the defense of the indefensible. . . . Thus political language has to consist largely of euphemism, question-begging and sheer cloudy vagueness. . . . The great enemy of clear language is insincerity. Where there is a gap between one’s real and one’s declared aims, one turns as it were instinctively to long words and exhausted idioms.

Orwell’s point is that bad language often marks insincerity. In other words, perhaps we can assess the morality of the Court’s decision by looking at its own words. The Court’s use of vagueness, question begging, and euphemism says a lot about what it thinks of the merits of its own position or, at the very least, it reveals its fear of what others would think if it were to speak plainly. And therefore it does not.

Matters as sacred and irreversible as life and death deserve, indeed demand, plain speaking. The Court’s words confuse an already difficult situation, dishonor Alfie and his parents, and undermine whatever legitimate moral authority the state may have in matters pertaining to children. If the Court is going to deny the rights of the parents to care for their son, then let it say so, plainly and without dissembling. Otherwise, let the Court not be surprised when people question the moral integrity of both the ruling and the Court itself, and decide that perhaps those willing to take full responsibility for Alfie—his parents—should have the prerogative of determining his best interests.

Written by the Rev. Dr. W. Ross Blackburn. Rev. Blackburn is the Rector of Christ the King, an Anglican Fellowship in Boone, NC and an Anglicans for Life’s Board Member.  This article originally appeared on the Human Life Review website.