Can you think of the last time abortion was discussed on the evening news? For myself, I can only recall a scant reference to the undercover Planned Parenthood videos in 2015, after the initial furor of interest forced the national news media to take a grudging look. But in the early 2000s, abortion was a big topic in the news. In 2003 the Partial-Birth Abortion Ban Act was enacted, and interest was revisited in 2007 when the Supreme Court Case, Gonzales v. 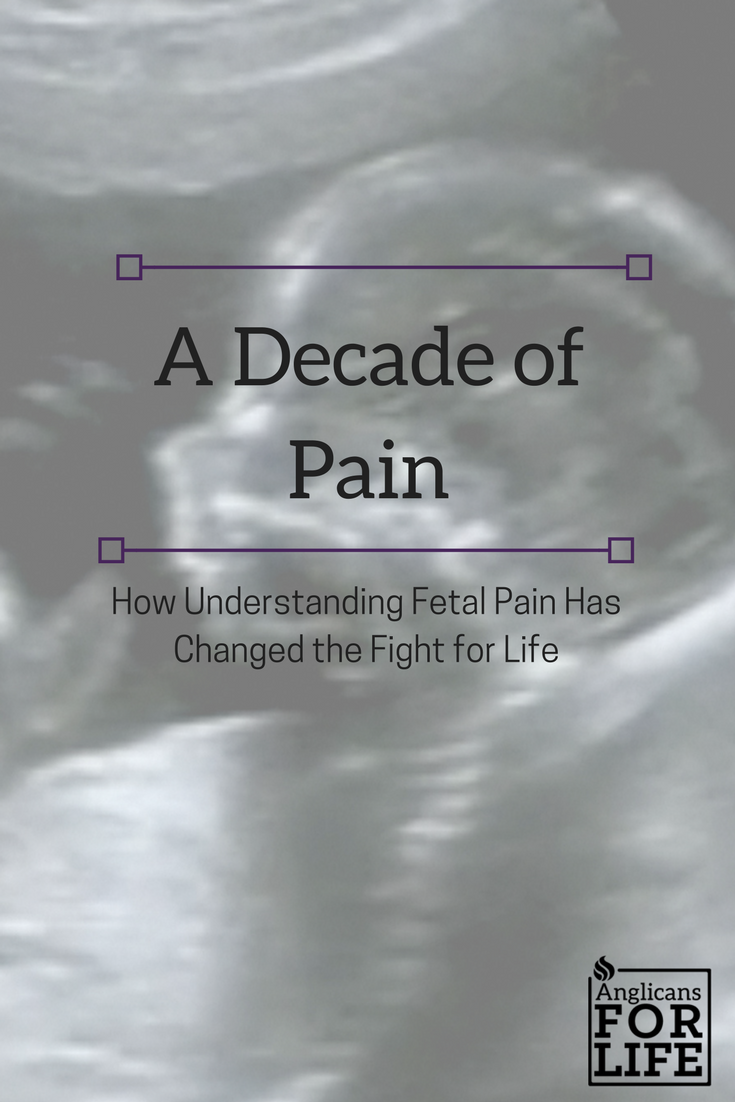 Still, the hot-topic conversation in the abortion debate in the early 2000s, which was connected to the Partial-Birth Abortion Ban, was the idea of fetal pain. Research was increasingly discovering that children in the womb could feel pain…making abortion an even more horrific act and giving life-affirming people new footing in the struggle for Life. But, after a decade since this research was debated and shared, what have we learned about fetal pain and what have been the responses, legislatively and societally?

In 2008, Annie Murphy Paul, while working on a book about the lasting effects of early experiences, wrote an article entitled “The First Ache” that was published by the New York Times. She highlighted the work of Dr. Kanwaljeet Anand. While a resident at John Radcliffe Hospital in Oxford, England, he discovered that pre-term infants returning from surgery were in significant distress and often had a massive stress response. He realized that the problem was that these tiny children were given a paralytic to hold them still during surgery but no anesthesia. The assumption was that their nervous system was too immature to register pain. But Dr. Anand proved through clinical trials that babies who were anesthetized appeared more stable compared to babies who hadn’t received any anesthesia and had a lower mortality rate. His research revealed that unborn babies can perceive pain by 20 weeks, if not earlier.

Of course, in the same article she sites research and researchers that could indicate that unborn children in the womb are either incapable of feeling pain or psychologically perceiving pain as born adults can. But the intervening decade between 2008 and now shows us one thing—we are still learning so much about the secret world in the womb and what babies can really understand. In 2013, a study showed that unborn babies would react to noxious stimuli with avoidance reactions and stress responses, and as early as 8 weeks gestation a baby reflexively reacts to invasive procedures. A different study in 2013 used functional magnetic resonance imaging (fMRI) to study the brains of unborn babies at 24-39 weeks of gestation and found that, at 22 weeks, unborn babies already had sufficiently functional neuronal connections to experience pain. In fact, instead of not feeling pain, unborn babies may actually feel pain more intensely than a born adult. Because neural mechanisms that inhibit pain sensations do not develop until 34-36 weeks gestation, unborn and pre-term babies show a hyperresponsivness to pain. A 2015 study found that babies had 18 out of 20 of the same brain regions as adults and were four times more sensitive to pain than adults. The Charlotte Lozier Institute has an excellent list of references to fetal pain research.

While we aren’t entirely sure how, when, and to what extent babies feel pain, there is no doubt that people are listening, and the legislation is changing accordingly. As of October of 2017, 17 states have passed bans on abortion at approximately 20 weeks gestation, due to growing understanding of fetal pain: Alabama, Arkansas, Georgia, Indiana, Iowa, Kansas, Kentucky, Louisiana, Mississippi, Nebraska, North Dakota, Ohio, South Carolina, South Dakota, Texas, West Virginia, and Wisconsin. In 2013, the Pain-Capable Unborn Child Protection Act, or Micah’s Law, was first introduced to ban abortions nationwide after 20 weeks, on the basis of fetal pain. It has passed the House three times but has never received the required votes in the Senate. Still, the bill is put forth every year, another annual reminder of the physical harm caused to unborn babies in an abortion. And that reminder is sticking in the minds of the American public. According to a 2017 poll from Susan B. Anthony List, when asked if they supported legislation that would outlaw abortions after 20 weeks (or 5 months) of pregnancy, over 60% of those polled either strongly or somewhat agreed.

Still, as important as it is for the public to grasp the humanity of the child, this is still a difficult topic for women who have had abortions. The regret of her involvement in her child’s death is one thing; the knowledge that her child could have been in pain is another entirely. Even as we continue research into the development of children in the womb and making legislative pushes, we as Christians must remember the, often, silent hurt and grief felt by women who have had abortions. As much as we must share the truth about pain felt by the unborn, we must share about the forgiveness available through Christ.

Obviously, life-affirming people would prefer that abortions at all stages of development would be unthinkable. Still, the continued research into the development in the womb has brought to light many things, some good and some bad. It has created new struggles for women who have had abortions. But it has also helped educate the public on the horrors of abortion and create legislation that can save lives in the future.