Defending Life in Holy Encounters: How Pro-Life Apologetics Can Change and Save Lives

Let’s start with a hard truth: the phrase pro-life apologetics is a frightening one. The life argument is one with so many different layers that it makes us unwilling to discuss it. But if we firmly believe in something, like the sacredness of life, we must be able to defend why we believe what we believe. And while abortion is seen as an obvious evil to us as Christians, for many people, it isn’t. In fact, a 2015 Vox study found that 39% of people in America say that they are neither pro-life nor pro-choice, when given the choice between the two in a survey. 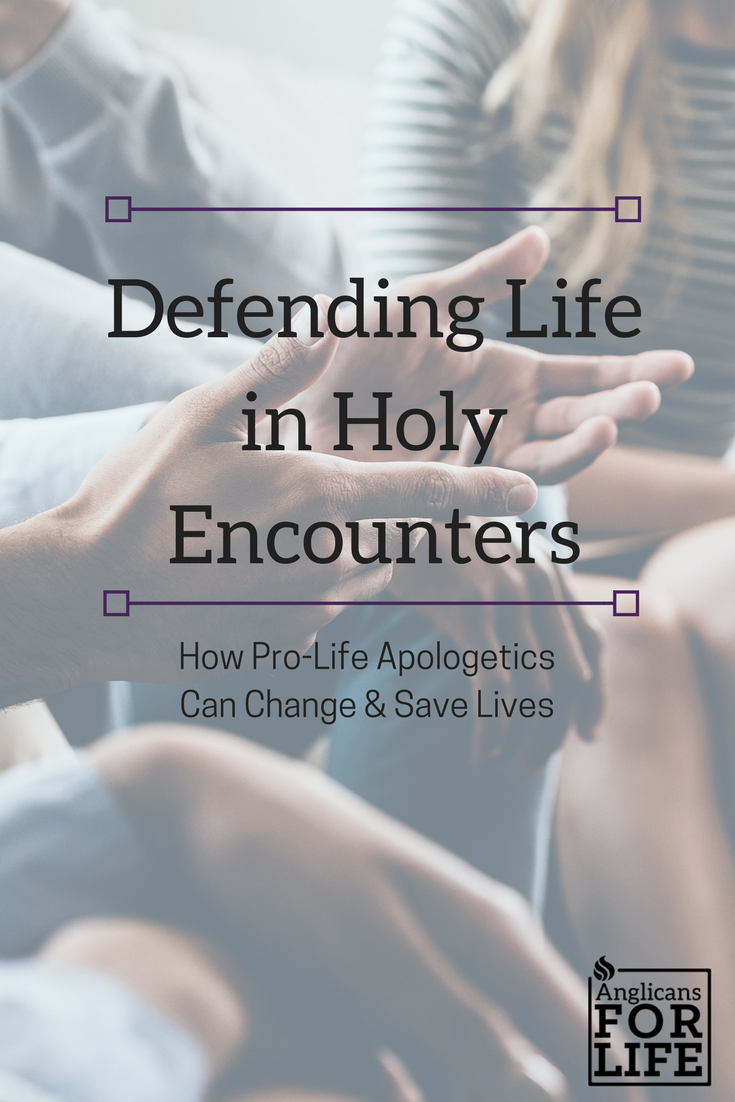 This statistic struck me when I read it. If I’m having a conversation with someone about abortion, chances are, they may be in that 39% of people. What would I say? Would I try to convince them that abortion is indeed an absolute argument and, if so, how would I do it? There are many cultural issues in which Christians, myself included, won’t be comfortable engaging in—abortion often being one of them. However, I’m convicted by the thought that, by not addressing the issue, I’m not being a good shepherd of the hope we’ve been given in Christ. We are called to engage in pro-life apologetics.

Scott Klusendorf, author of The Case for Life: Equipping Christians to Engage in the Culture, says it best: “Admittedly, pro-life apologetics may not appeal to some lay Christians. It seems many believers would rather focus on end times rather than these times. That’s a mistake.” In other words, Klusendorf is saying that we should be trying to change hearts and minds and winning them for the Kingdom. Our mission on this earth is much greater than just having our convictions and sharing them when it is convenient; our mission is to be able to share our convictions eloquently when it’s the furthest thing from convenient. So, how do we find clarity in the abortion argument in order to engage well with those who disagree with us?

Recognizing this need, Stephanie Gray, an international presenter on life issues and former executive director/co-founder of the Canadian Centre for Bio-Ethical Reform, spends her time educating groups about how to engage in pro-life apologetics. She is well-known for her book Love Unleashes Life: Abortion and the Art of Communicating Truth. Obviously, Stephanie was a no-brainer for Anglicans for Life to invite to Summit 2018 in January. We invited her to speak about pro-life apologetics (check out the full video on our YouTube channel) and to demonstrate how we can winsomely engage the culture on abortion.

Stephanie began by giving three points to keep in mind when entering a conversation:

1. What is the nature of the argument we are facing? How do we staying focused and bring clarity to the issue?
2. How do we make an intellectual argument?
3. How do we reach the heart of the person we are engaging with?

The first step in engaging with someone who disagrees with us is to simply begin a dialogue. Ask the other person an open-ended question like: “What do you think about abortion?” You may find if the person is in the 39% group that is indifferent about abortion that their initial argument is a bit hard to follow. They may say that they are pro-life except when…. Fill in the blank. Circumstantial arguments are crucial to know how to combat, as most justification will be based on difficult circumstances, such as rape, a threat to the mother’s health, lack of a support system, and so on.

Stephanie said that, after understanding and listening, we must acknowledge the truth in all of those statements. Those ARE really hard circumstances, without a doubt. By understanding the defense, you can then seek to hit on the exact point that needs some truth spoken into. Listening allows us to be able to minister more effectively.

After you establish the defense, it is then and only then acceptable to create an intellectual argument. The pro-life movement can very much win the argument with reason, philosophy, and science based on the following deductive reasoning:

● If you believe in human rights, it is only logical to say that preborn children have human rights, just as born children.
● Two humans are only going to produce another human being. The name of that other human being they are growing and producing is an embryo.
● The argument that “it’s just a fetus” is intellectually invalid. The word “fetus” is not species specific to humans. It is used to describe preborn mammals, as well. It simply refers to how old the species is, not what it is.

Stephanie went on to say that the most important thing to remember is that it’s not enough to win the argument. That’s not the point. It’s about winning the heart. Realizing that previous experiences color a person’s interpretation of a situation is vital. When we are having a hard time reaching someone, most of the time it is not a mind issue but rather a heart issue. Questions are the most important tool when approaching this heart issues.

Finally, we must be willing to set our agenda aside to minister to the person in front of us. While it’s easy to let our passion for the preborn cloud our witness to the woman or man arguing with us, we cannot let that passion overtake the opportunity to show someone the love of Jesus. Fact is, winning an argument doesn’t mean anything, unless winning includes saving the lives and souls of God’s people and showing God’s love.

Love without Truth isn’t reality – it is sentimentality. And Truth without love isn’t sustainable – it is terminal. In a world that tells all of us that we need to accept everything so that we don’t offend anyone, I’m convicted by how damaged our view of love has become. As God’s people, who firmly believe in the sanctity of human life, let us always speak in truth and love, recognizing that words lacking in either will never accomplish what we are called to do. Let us be a people who loves authentically.