Spokesperson for Joy: Down Syndrome, Gerber, and our Disabled Culture

Last week, the Gerber Company unveiled the 2018 Gerber Baby.  Like every other Gerber baby that has come before him, 1-year-old Lucas Warren from Dalton, GA is undeniably cute.  But Lucas is the first Gerber baby to have Down syndrome since the contest’s start in 2010.  “He’s very outgoing and never meets a stranger,” Lucas’s mom, Cortney said, “He loves to play, loves to laugh, and loves to make other people laugh.”  This is both a delightfully bold and i 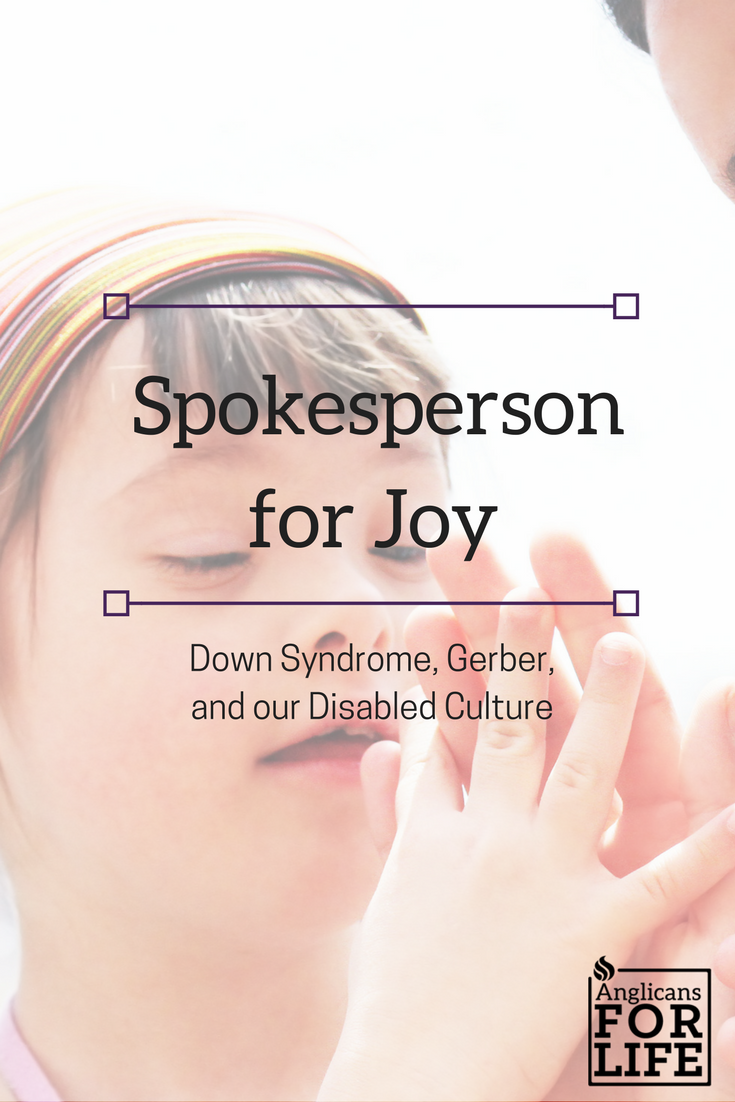 ncredibly timely move for Gerber, considering that Iceland has claimed to have “eliminated” Down syndrome—not through scientific breakthroughs, of course, but through abortion.  But Lucas doesn’t know that there are many who see his life as not worth living—that government officials will brag about their non-existent disabled population or that abortion is seen as a “merciful” choice for unborn children who show positive results for Down syndrome in prenatal tests.  Instead, his face shows a big smile, one full of happiness and innocence.

What, exactly, is this “disease” to be eradicated?  Trisonmy 21, also known as Down syndrome, is a genetic disorder caused by a full or partial third copy of the 21st chromosome.  Trisonmy 21, or nondisjunction, is the most common type, seen in 95% Down syndrome cases.  In this type of Down syndrome the extra 21st chromosome is present in every cell of the body.  According to the Centers for Disease Control and Prevention, approximately one in every 700 babies in the United States is born with Down syndrome, making it the most common chromosomal condition.

So, many people with Down syndrome, even if they aren’t fully autonomous, are capable of having a career, getting an education, and even having a romance.  And we were sent a wonderful, living example of this in a beautiful video from Carolyn Reed, an Anglican attending St. Nicholas Anglican Church in Atwater, CA.  This video from CNN features her son, John, and his girlfriend Marissa, both of whom have Down syndrome.  But what is most notable about them is not their condition—it’s their enthusiasm, joy, and willingness to always be, in Marissa’s mother’s words, the first ones on the dance floor.  John and Marissa are not burdens.  They are people with an infectious love for life, not in spite of their condition or because of it, but in conjunction with it.  Yes, they have Down syndrome and that will impact who they are and what they do with their lives—but that doesn’t mean that those lives don’t have value.

Tell me, when is the last time you felt joy like John and Marissa?   I mean, real joy.  Joy without self-consciousness.  Joy without worrying about the day-to-day stresses and struggles.  Joy in every relationship, conversation, outing, and task.  A critic may call a Down syndrome person’s joy childish, a blissful ignorance of darkness and pain.  My question is, what on earth is wrong with that?  Society may view people with Down syndrome as disabled, but it is really we who are disabled.  Jaded and broken, we are so disabled by our own struggles and stresses and preoccupations that we can’t see beauty all around us, celebrate without restraint, and love without restrictions, like people with Down syndrome can.  Eradicate Down syndrome?  God forbid.

March 19th-25th is Down syndrome awareness week.  Do you know someone in your life who has Down syndrome?  Talk with them.  Honor them and their parents and loved ones.  See their happiness not as something silly or childish but as something to emulate and honor.  May Lucas the Gerber Baby, with his big, beautiful smile, and all those who have Down syndrome be spokespeople for their positive outlook on life.  And may we as society seek to not only protect them but celebrate them for their ability to see the world differently and to live with more joy.

The Episcopal Church and Anglican Church in North America (ACNA) continue to diverge in social policy and theological belief surrounding bodily a...

By: By Julie Grimstad I believe that unarmed truth and unconditional love will have the finalword in reality. This is why right, temporarily defe...