Human Rights – Abortion, Assisted Suicide, and the Protection of All People 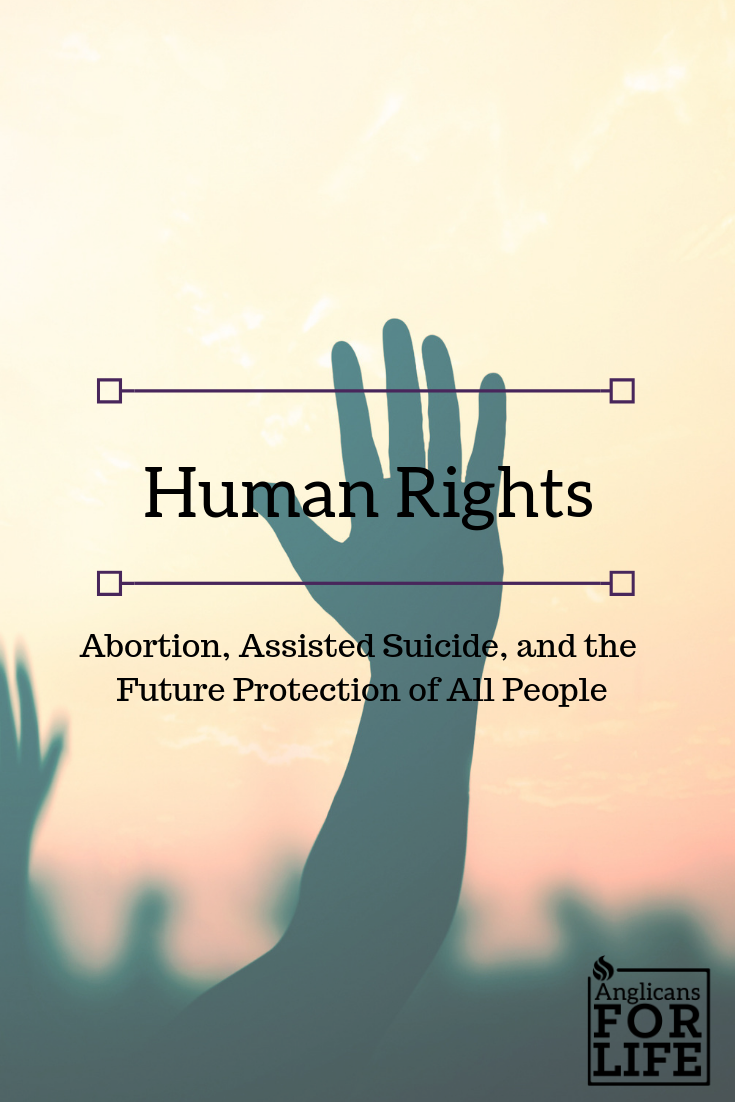 “I know my rights!”  This is a line usually delivered by a belligerent, unpleasant character on your dime-a-dozen police procedurals.   The other characters may roll their eyes collectively during his bellicose rantings.  We the members of the audience are meant to find such characters either amusing or annoying.

But why do we find someone declaring their rights so very laughable?  I think, especially in the United States, we take our rights for granted.  American individualism and, yes, entitlement is born and bred into us—we know what we want, and we know we have the right to it.  Certainly, if you ask the average citizen of the United States where their rights come from, they may be able to talk about the Bill of Rights or the protection provided through military success.   But most people, with very few exceptions, such as those who have served in the military or individuals who have had to fight against discrimination or injustices, have not had to fight for their right to have…well, rights.

And yet human rights, these crucial liberties that we depend on so utterly, are shockingly modern concepts.  The protection of someone’s right to life, liberty, and happiness is an idea that sprung from the Enlightenment in the 18th century.  The 19th century saw reformers struggling to end slavery, injustice, and abuse throughout the western world.  But still there wasn’t a universal declaration of human rights until December 10th, 1948, after the end of one of the most horrific genocides in history, the Holocaust.  It was ratified by the United Nations General Assembly in Paris and includes ideas such as freedom from slavery, equal protection under the law, protection from torture, and the right to freedom of expression.  All of this seems very obvious—but think about it—universal human rights are only having their 70th anniversary this year.

Why do I say all this?  Perhaps you are thinking to yourself, “I want to read about pro-life stuff, I wasn’t looking for a history lesson.”   Fair enough.  But I wanted to make sure we understood how very recent the concept of universal human right is, in the scope of human history.

Because we are deluded when we think ourselves as so much more sophisticated and advanced than previous generations.  We are not at the pinnacle of human rights—we are in its infancy.  And there is no greater evidence of this than in our struggle to grapple with the idea of human rights with the legalization of abortion and assisted suicide.  The United Nations Human Rights Committee drafted a memo in November of this year saying that abortion and physician-assisted suicide should be added to these universal human rights.  The committee called for abortion to be decriminalized everywhere and for physicians to terminate the lives of their terminally ill or physically and mentally suffering patients.  All from a governing body whose very conception came from a desire to protect human life!

Often, when pro-life people read through news stories like this, their first instinct is to think, “Why aren’t people valuing Life like they used to?”  But here’s the thing—at no point in post-Fall human history have we valued Life more than we do now!   Slavery, racial hatred, sexual exploitation, war crimes—all of these horrible things are still happening worldwide, yes.  But we’ve never cared about it as a species more than we do now.  Although the pressure to legalize assisted suicide and euthanasia may unfortunately become worse, abortion rates are dropping in the US, and more young people are opposing abortion than ever before.  Science is shredding the fiction that an unborn child is nothing more than clump of tissue.   Abortion rights aren’t our future—they are our past.  End of life legislation may be pushing forward now, but I believe it too will be exposed for what it is—a denial of a valued, if aged, life.

I want to be clear here.  No amount of legislation or education will eradicate all the evils in our society.  We know as Christians that there is only one solution for the sins of the world—and our own—and that is salvation in Jesus Christ.  But I want to give us some hope, on this the 70th anniversary of Human Rights Day.  While our ultimate trust must rest in God and in God alone, we are not without hope that the evils of abortion, euthanasia, and assisted suicide will have their legal end here on earth, as more and more eyes are opened to the horrors committed in the name of expediency, pity, and women’s rights.

So be grateful for all the rights you have, for those of you who live in nations that provide these protections.   And may those of us who seek to protect the rights of the unborn, elderly, and vulnerable not lose hope in the face of opposition—because, God willing, the future of human rights will not see the ending of lives prematurely but the valuing and protection of all lives.