Being Pro-Life Has Broken Me

My husband and I attend our local pro-life pregnancy center’s banquet every year. In November 2015, we were sitting at a table in the far corner of the room. It didn’t give us a great view of the speaker, who happened to be former Planned Parenthood director Abby Johnson. But it did give me a clear view of a woman sitting at a table adjacent to ours. She was clearly transfixed by the speaker’s presentation. In the privacy provided by a crowded room, her fa 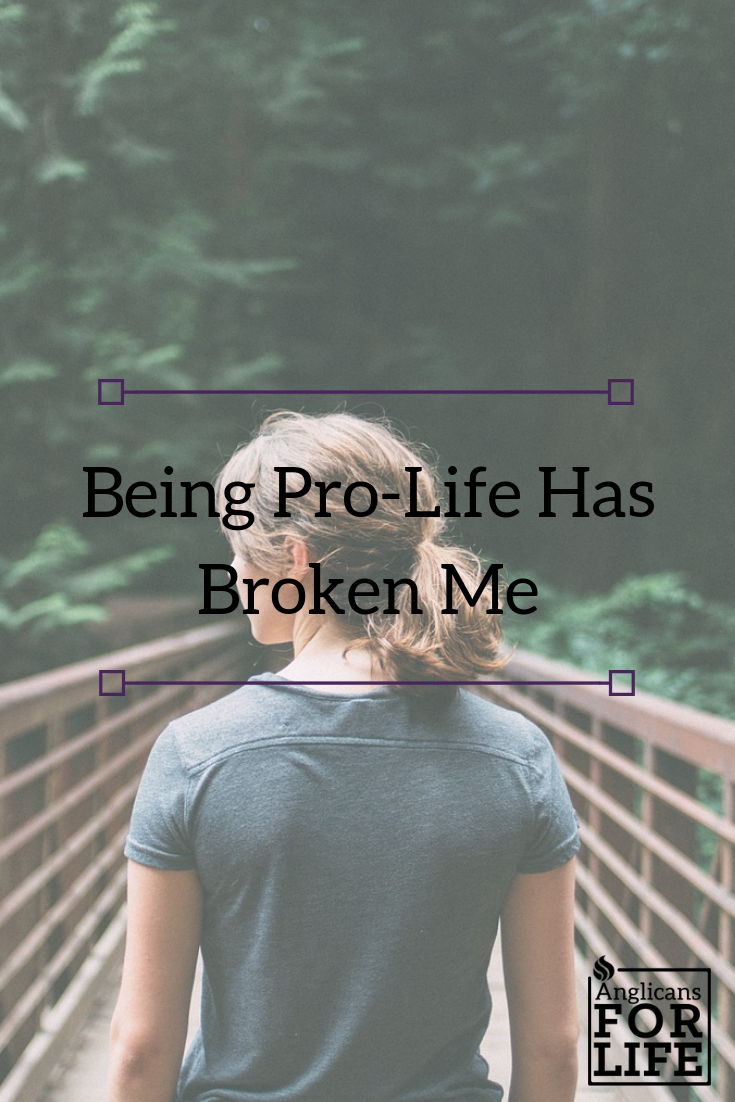 ce was open and transparent, flashing between obvious surprise and despair when Ms. Johnson talked about the infamous undercover Planned Parenthood videos from the Center for Medical Progress, which had been first released in July of that year. Her eyes often welled with tears, and she was clearly moved and shocked by much of what she heard.

I watched her throughout the evening, safe in the anonymity of the same crowded room, and my heart ached with a feeling I couldn’t at first define. It wasn’t bitter enough to be envy but was too strong for wistfulness. Long after I left the banquet, I settled on it; I sincerely longed for her capacity to be shocked. I wished that I too could be stunned at the horror of abortion and the devastation it causes. It was the first time that I realized the impact that this work has had on me. It was also the first time that I realized that it had damaged me.

Damaged. I cringed writing that. I will cringe rereading it. A practical woman descended from a long line of reserved people who would never be so impolite as to express strong feelings of any kind, declaring myself “damaged” is a personally repellent thing—it’s just seems so unnecessarily dramatic. But it’s true. There is no other way to describe it. I’ve been irrevocably, unquestionably damaged in being actively pro-life.

You see, it’s not necessarily what I do that causes the damage. It’s what I cannot forget. I can’t unhear the desperate, tearful testimonies of women who have been hurt by abortion or the casual cruelty of abortion advocates who do everything to belittle or besmirch pro-life people. I can’t unsee the growing numbers of people dying from legal assisted suicide and euthanasia in the United States and abroad or the scarring images of the unborn children torn out of the womb. I can’t unfeel the despair of knowing that today’s teenagers are increasingly feeling isolated and depressed or the sinking certainty of failure when a Silent No More leader is struggling to help an abortion-minded woman to choose life.

I can’t unhear, unsee, or unfeel. I can’t unknow. Ignorance, something I didn’t even know I would miss until I lost it, is forever denied to me. And that has left me damaged—a little broken, even.

There are days that I think I’ve lost my capacity to feel very deeply—that I’ve seen every horrible thing that I could possibly see, that I’m somehow now immune to despair. But then I read another Silent No More testimony or hear about a new assault on Life and my seemingly calloused heart breaks anew. Admittedly, most days aren’t full of sadness. Often I can be so wrapped up in the everyday office tasks that I forget the dark core of what we do. But then there are other days that I feel weighed down by all the pain and death. Sometimes, despite all my efforts, I feel that I carry that despair home with me, a cold weariness that reaches all the way to the bone. I do my best to leave what I experience and see in the office back where it belongs. If a news channel or fictional TV show references abortion or assisted suicide, I turn it off. I avoid reading books or periodicals about those topics. And when well-meaning family and friends ask me about our pro-life work, I feel a strained, rictus smile cross my face—because often the last thing I want to talk about is the blood, regret, and death I see every work day.

I don’t think my experience is uncommon. So many people who labor in pro-life ministry are broken, in some way, by what they do. The pregnancy center volunteers or staff see countless abortion-vulnerable women come, take a pregnancy test…and never return, leaving them forever wondering about the women and the fate of their unborn children. Abortion healing program leaders bear the secret burden of hundreds upon hundreds of wounded women and men. End of life advocates see increasing interest in legalizing assisted suicide and struggle against the apathy of states and nations that don’t appreciate the danger to the elderly and vulnerable. So many of us who serve Life are wounded, frustrated, and more than our fair share of jaded. We are all a little broken.

And yet our heavenly Father is a God of wonderful contradictions—because this brokenness is our greatest asset. In Psalm 51, a repentant King David pours out his mingled grief and praise to the Lord: “You do not delight in sacrifice, or I would bring it; you do not take pleasure in burnt offerings. My sacrifice, O God, is a broken spirit; a broken and contrite heart you, God, will not despise.” (Psalm 51:16-17) We often think pejoratively of being broken and damaged—after all, that means being hurt and not being in control. But God not only accepts our brokenness—He greatly desires it. While He does not and could not rejoice in the sins of this world, the troubles we face and the hurts that we receive while struggling for Life come from Him, and they serve to humble our pride, to remind us of our need of salvation, and to draw us closer to Him. If we weren’t broken from what we do, we could not do it in obedience to God or truly show the love of Christ to those who are hurting and vulnerable. Only broken people can help broken people.

There are other things I wouldn’t know if I did not work with Anglicans for Life. I would not know the depth and joy of salvation found in the lives of women and men who have received healing from abortion pain. I would not know of the awesome ministries that exist to serve the elderly. I would not be humbled by the inspiring stories of adoption and redemption. I would not know that there are pro-life youth ministers and volunteers who want to teach young people that their worth and identity is in Christ.

And if I didn’t work at this job, I wouldn’t have had the blessing of seeing firsthand the goodness of God’s salvation—that there is no one so damaged that God cannot use them for His Glory, and that no one is so broken that He cannot redeem and bless them. I cannot forget that, and I thank God daily for that privilege.

The Silent No More Shockwaves of Abortion theme for November is healing the pro-lifers, which acknowledges the real pain and grief felt by pro-life people. For those of you who have been on the front lines of Life for many years, whether you work in a pregnancy center, engage in sidewalk counseling, minister to the aging and dying, are adoptive parents, or simply love Life, I honor your service to Life and the pain—and joys—you have experienced in doing so.