“You are glowing!” It’s a compliment often given to pregnant women—at least those who have gotten through the exhaustion and nausea of the first trimester! But attention given to pregnant women goes beyond casual compliments. I’ve often found that people in general give much more consideration to these women than we do the average person. Someone on a crowded bus or subway will give up their seat. Many parking lots have signs to indicate “expectant mother” spaces. Doors will be held open and assistance will be offered. Certainly, these are small, every-day acts of 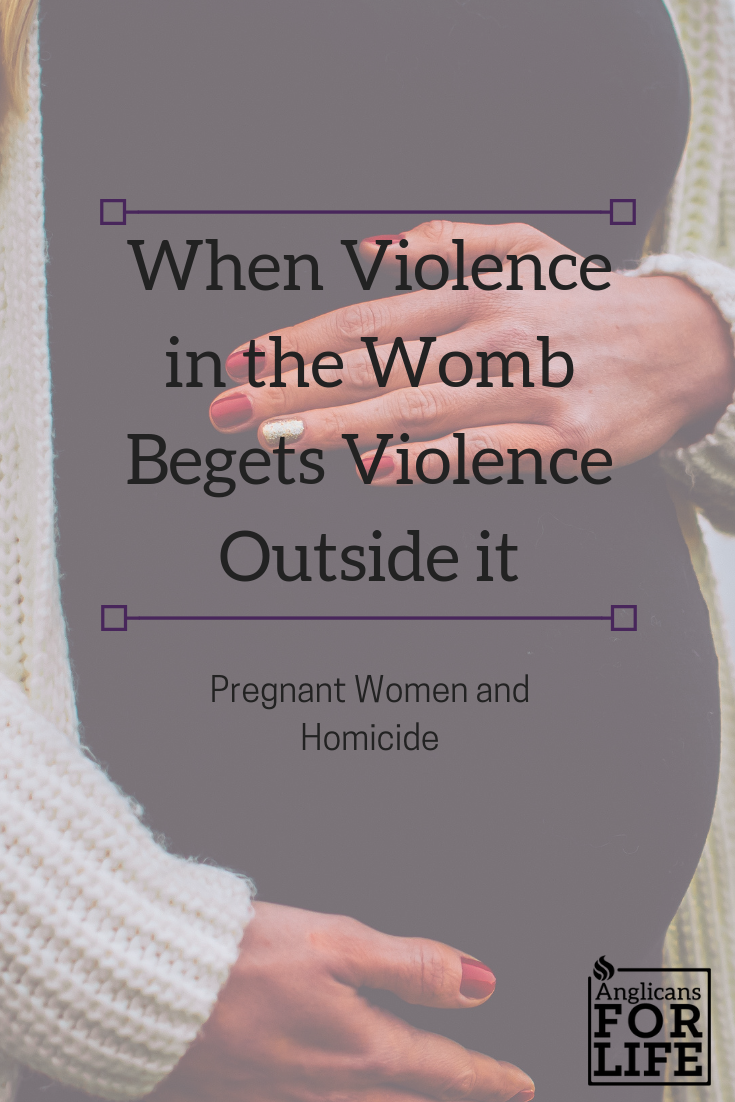 kindness. But these demonstrate our innate desire to care for pregnant women and to acknowledge that special, if sometimes challenging, stage of their life. It also demonstrates the respect we have for the amazing thing these women are doing—providing care and sustenance for the children growing inside them.

However, it is cruelly ironic that women who are in the process of creating and giving birth to a new life are themselves at greater danger of losing their own—in the most violent way possible. A study performed by the CDC in 2005 showed that homicide was one of the leading causes of traumatic death among new and expectant mothers, with higher risks for women who are younger than 20 years old or African American. The CDC study found that homicide accounted for 31% of maternal injury deaths. Only auto accidents had a higher percentage of death (44%). And that danger is, sadly, often close to home. According to a 2017 CDC report, over 50% of female homicides in which all circumstances are known were the direct cause of intimate partner violence. 15% of women who were murdered and of childbearing age were pregnant or 6 weeks or less postpartum when they were killed.

Cara Krulewitch, a researcher at the University of Maryland at Baltimore School of Nursing, thought the findings were significant. “Homicide was second on the list of injuries. It wasn’t falls. It wasn’t suicides. It wasn’t anything else…there is a phenomenon going on out there and we don’t understand it yet.”

Does being pregnant put a target on women’s backs? I appreciate that correlation does not always equal causation. There are no doubt a number of factors which contribute to these homicide rates, especially if these women were already abused or victimized by these men. But we are kidding ourselves if we attempt to argue that legal abortion isn’t a factor in these deaths. The same women who are more likely to be murdered (young, non-Caucasian, in unhealthy relationships) are precisely the same group of people that we would consider “abortion vulnerable”.
But we have more than statistics to argue this point. We have names and faces:

• 31-year-old Christopher Kemp was on trial in July of this year for killing his unborn daughter during a vicious attack on the mother of his child, Jessica Jackson. Ms. Jackson survived but was seriously injured. However, her baby died from injuries caused in the attack, including lacerated organs, displaced ribs, fractured bones, and a fractured skull. Kemp attacked Jackson after she ended their relationship and told him she didn’t want his name on their child’s birth certificate. After the attack, Kemp allegedly sent a friend a Facebook message saying, “I didn’t want to hurt her, just the baby.”

• In December of 2017, Brandon Freeman of Memphis, TN shot a pregnant mother and her unborn baby. After he admitted to his crime, he told police that he did not know if the woman, Keosha Miller, was carrying his child and wanted out of the relationship. It was the “easiest” way he could think of to get out of it.

• Christopher Poulson, 28 of Smithfield, UT, has been charged with the murder of his pregnant ex-girlfriend, Emily Quijano Almiron, and her 3-year-old son in 2015, supposedly because she refused to abort their unborn baby. A former coworker testified hearing Almiron and Poulson argue about an abortion not long before she went missing. Poulson told Almiron that they couldn’t have a baby at the time and urged her to get an abortion.
And how many more deaths involved circumstances just like these ones? By choosing life in these less than perfect circumstances, these women became victims themselves.

The question is—where is the outrage? If a woman’s right to choose is all that abortion supporters are fighting for, why aren’t they up in arms when women—who exercised their right to choose and decided on life for their unborn children—are killed or harmed by the fathers of their children, who perform a horrific abortion procedure of their own? Because much like how abortion clinics would rather hide behind promises of care than provide safe medical care, women being denied abortion access is a much better narrative, rather than that they are being killed for not choosing to abort. Because, after all, when an unborn child is considered expendable, how long is it until the woman who carries him or her—who has the gall to choose life when abortion is obviously the “better” option for her—is disposable as well?

Abuse begets abuse. Violence begets violence. And, sadly, the legal death of one contributes to the illegal but disregarded death of another.