Inconsistent Anger – When the Sanctity of Life Only Means Some Lives

Many of us remember reciting the pledge of allegiance in school. I can still recite it by heart. While the “one nation, under God” line has come under fire in recent years, the end statement, “with liberty and justice for all”, seems like the least divisive part of the whole pledge. After all, America loves to tout her commitment to liberty and justice. Our Bill of Rights and the Constitution were written specifically to protect the vulnerable, the minority, and to make sure that total power was not given to the majority alone—so that all people could be given equal protection under the law. 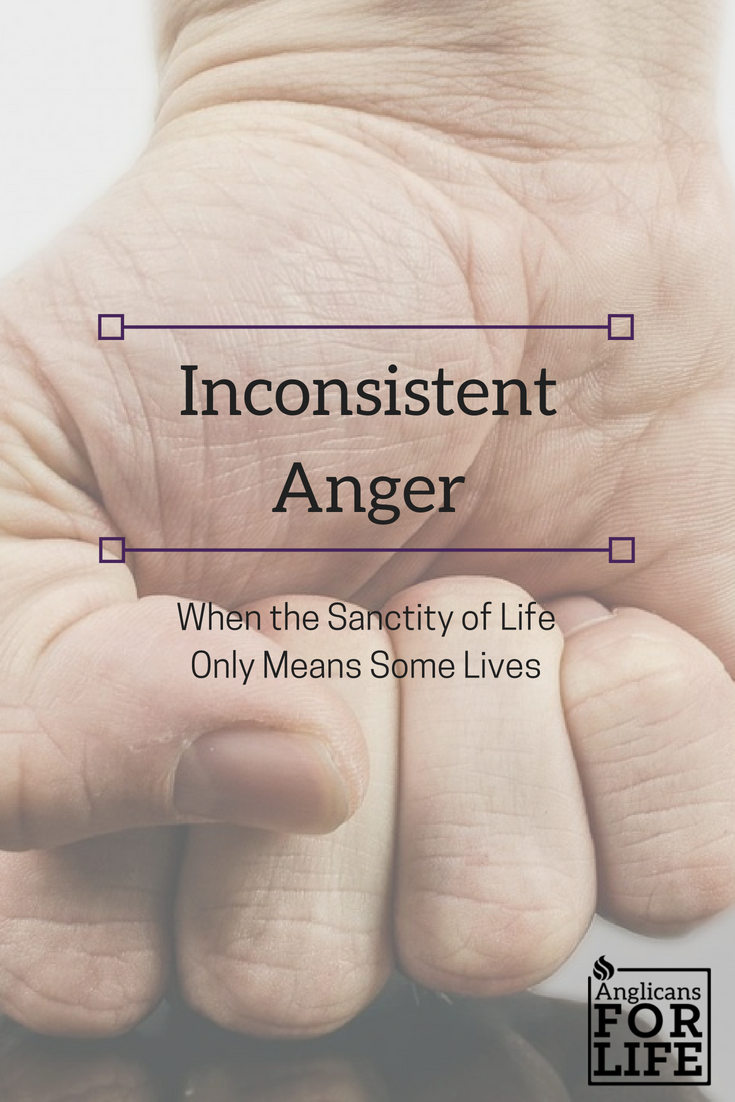 But we know this isn’t a perfect world and that this ideal doesn’t always happen. Sometimes rights aren’t protected. Sometimes being powerful and well-connected is more important than the truth. But the United States guarantees protection to those who want to speak out about injustices and to express their righteous anger, be that in the press or through public demonstrations. Most recently, this right has been used to protest the separation of immigrant children from their parents at the US border. These protests were featured on every media outlet at the end of June 2018. And it led to action. On June 20th, the President signed an executive order to stop the separation of undocumented families. Why bring this up, you ask? There aren’t any easy answers for the problem of immigration, nor is it my intent to start a political and social debate (I do recommend this article, however, which discusses the viewpoints of both border officials and undocumented people trying to enter into the United States). I reference the fervor over the separation of families at the border to point out our nation’s inconsistent anger. Here are two other recent incidents of injustice. Have you heard of them?

First, two preemie twins were born at Riverside Methodist Hospital in June 2017. Their mother Amanda was brought into the hospital at 22 weeks and 2 days into her pregnancy, after experiencing bleeding. The hospital told her they would not attempt to resuscitate if the boys were born before 22 weeks and 5 days. At 22 weeks and 5 days, Emery and Elliott were born. Emery was placed under a heat lamp but was given no medical assistance and died 45 minutes later. Elliott, the larger twin, survived for two hours while assistance was denied by the hospital, despite Amanda’s pleading. The Riverside staff refused to help, the boys died, and the cause of death was labeled “stillbirth”. Their mother has attempted to seek redress from the hospital, but the hospital itself has not even sent an official condolence letter. While abortion laws in Ohio currently protect babies in the womb after 20 weeks, apparently children at 22 weeks gestation are allowed to die of neglect outside of the womb.

Second, in June of this year, Indiana Right to Life announced the filing of 48 consumer complaints against nine Indiana abortionists who allegedly failed to follow state reporting laws regarding abortions they performed on girls under the age of 16—some of the girls were as young as 12. These laws were enacted in July of last year to protect underage girls from any continuing sexual abuse or statutory rape. “The doctors’ failures to indicate this step was taken demonstrate that they may have violated the law, possibly deliberately, and thereby possibly allowed for the continuation of abuse,” said U.S. Reps. Jim Banks and Todd Rokita. Still, while Mike Fichter, president of Indiana RTL, does expect the Indiana attorney general to launch an investigation, he doesn’t plan on the county prosecutors taking any action, as those prosecutors have gone on record to say they wouldn’t defend the new pro-life laws undergoing a legal challenge—meaning that the protection of abortion is more important than the protection of underage girls, whose potential abuse or assault would have gone undocumented by abortionists.

When talking about the separation of children from their families at the border, there were days of coverage, featuring leaders and marchers and human rights activists. But there hasn’t been a single national news story covering either of these other incidents. No anger. No marches. No justice. We are told that all lives matter, but why is it that, in reality, only some lives seem to matter? Because they are more visible on social media platforms? Because they fit a particular political agenda? Those aren’t good enough reasons for me, and I hope they aren’t for you, either.

I know, I can hear the frustration as you read this. I can’t know or care about every bad thing that happens in this world! No, you can’t. But if you read about an injustice, share it. When you see something undone, do it. Speak up. We, as people of God, need to make our anger consistent, because if anything has been determined in the recent uproar over separating families at the border, our voices can make change happen.

If all lives matter, let our righteous anger speak for those who cannot speak for themselves, whether they are the unborn, the elderly, or the vulnerable. May we live up to our ideas of liberty and justice—not just for people we are told to value but for all of whom God has made in His likeness.