Those Who Lived to Tell the Tale – Abortion Survivors

Everyone loves a happy ending, which is why we enjoy stories of survival. Whether people are battling the physical elements, overcoming personal problems, or outliving a disease, there are countless movies and autobiographies about real people who survived during periods of great adversity. People like 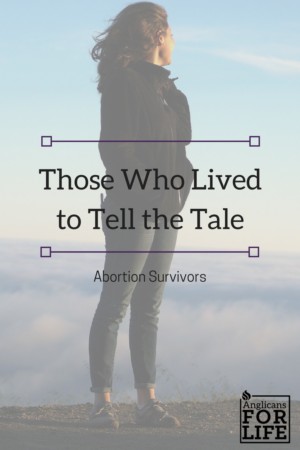 these stories, because they encourage the viewers and give them hope—that ordinary people can triumph in the midst of terrible circumstances. We see survivors as real-world heroes, lacking in superpowers but brimming with strength of character.

Yet, despite our love of these kind of heroes, there are survivors whose stories are notably ignored or disregarded in our culture—survivors of abortion. Silent No More’s Shockwaves of Abortion initiative features this group of people during the month of July, providing healing program information, blogs, and testimonies.

But the phrase begs the question—what does it mean to be a “survivor” of an abortion, exactly? There are two different kinds of survivors. First, it refers to those who actually survived an abortion procedure. Second, it means those who were at risk of being aborted, those who were born after the Roe v. Wade ruling of 1973.

It is hard to say how many abortion survivors exist. Many children do not survive long after the abortion attempt due to complications from the procedure or because they are simply left to perish after their premature birth. Some adults may be survivors and not even know it. Some of these survivors could be a twin who survived an abortion procedure, while their sibling in the womb was not as fortunate. They also could simply never have been told about their birth experience, either by their birth or adoptive parents. Despite all this, more of these abortion survivors are beginning to tell their stories.

Survivors of actual abortion procedures bring a unique perspective into the abortion discussion. In being able to tell their stories, they stand as living witnesses of the truth that abortion supporters would prefer to ignore—that abortion ends the life of a real person, with a real potential and future. But abortion survivors must also bear a heavy burden. Their very witness, their survival, is a constant reminder that their lives were considered expendable and that their birth parent or parents wanted to abort them. As well as feeling unwanted, they also must struggle with their birth parents’ guilt and, sometimes, difficult health conditions that were directly caused by the abortion procedure. Notable abortion survivors are Melissa Ohden and Gianna Jensen, who publicly share their stories.

The other survivors of abortion were those who were born after Roe v. Wade and could have legally been aborted. Unlike survivors of abortion procedures, the numbers of those affected are large, but the impact is definitely different. Generational survivors can have feelings similar to siblings of aborted children, as they struggle with the knowledge that they too could have been disposable. They also have a missing generation of friends and siblings and must deal with the emotional fallout of parents or loved ones who chose abortion. Some of these survivors are even told that their parents had considered abortion for them and must to deal with those complicated feelings. Generally, however, the generations who survived Roe v. Wade must struggle with the mixed messages of the culture and their own experiences—is abortion a freedom that they should embrace or a painful, terrible act that has destroyed hundreds of thousands of their contemporaries?

If you are skeptical of the impact abortion has on the generations who survived, I will place a human face on this group. I am a survivor. I was born in 1988. In the late 80s and early 90s, abortion rates were at their peak in the United States, and the Alan Guttmacher Institute, statistic arm of abortion giant Planned Parenthood, estimated that there were 1.6 million abortions in 1988. 1.6 million. I have the security of knowing that I was wanted, that my parents were delighted at my birth. But I have to wonder—if circumstances were different, if my parents weren’t Christians or if they didn’t want any more children, would I have been just another number in that statistic, too? What about the classmates or friends I never met? What would my generation look like if we had all lived to see it? These are questions that will never be answered but will haunt those of us who were lucky to not be one of the 1.6 million unborn who were aborted that year.

Abortion survivor stories may not be common in our culture, but we should be sharing them. I encourage you to visit the July Shockwaves of Abortion website to learn more about abortion survivors. Perhaps one day these survivors, those who lived to tell the tale, will be able to have a happy ending to their story of survival—that victory, the end of legal abortion, will be reached.