“You Have Your Whole Life Ahead of You…You Should Get an Abortion.” – A Father’s Story

If I’d only known then what I know now. How many of us have said that?

Father’s Day has such a different meaning to me now at 60 than it did at 20. In 1975 my then fiancé was in college and unexpectedly became pregnant. We didn’t know what to do.

I looked up to my uncle, a wealthy and successful businessman, so I sought advice from him. He said, “You have your whole life ahead of you. You should ge 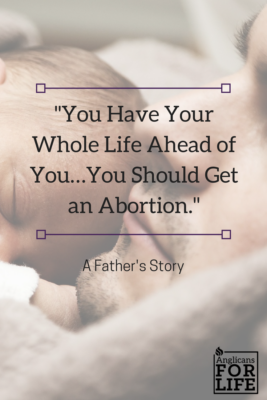 As men, we often think it’s a woman’s problem when she becomes pregnant – but it’s not. I believed at the time that it’s ultimately the woman’s choice whether to give birth or have an abortion. I should have suggested that we talk through our options.

There’s a statistic that says that in 80 percent of abortions, the dad walked away. That’s what I did. I let her go through with it without showing my support for the decision either way. I ignored the doctors telling me that after the procedure she wouldn’t want to have anything to do with me.
My uncle paid for the abortion and my cousin, who was also her best friend, took her. After the procedure she returned to her family, who owned a vineyard in a different part of California, and as the abortion doctor predicted…I never saw her again.

Through the years there have been many problems in my life. I could not figure out why I was acting and doing the things I was doing. I had problems with alcohol, anger, depression and insecurity, to name a few.

I lost jobs because of fighting, drinking and my bad attitude. I married in 1976 but never wanted kids and I did not treat my first wife with respect.
The pain of the loss of my unborn child was palpable. Not only were our lives irrevocably changed that day, but so were the lives of everyone I’ve had relationships with. It’s something I deeply regret.

How would I celebrate Father’s Day today if I had made a different choice? It isn’t just the path not taken…Father’s Day would mean so much more. What would my life look like? What kind of person would my son or daughter have become?

The Gift of Faith

The silver lining in my journey appeared about a year ago. The Lord Jesus Christ, through the Holy Spirit, made it clear to me that it was time to come clean and use my experience to help others. As a Christian I needed to share and help other men realize that they are a dad at conception. Their vocation is to support their lady and have their baby no matter what they have to do to get through it.

During a meeting in Dallas for pregnancy centers, I shared my commitment to build the largest pregnancy center in San Antonio. A gentleman approached me at the meeting and shared that he had two abortions.

Without hesitation, the Holy Spirit spoke through me, and I revealed that I had one too! I realized I needed to share my story.

I went home and told my (second) wife of 18 years about my abortion. She encouraged me to share it with the world and save lives. It became crystal clear I had to do this. My hope is that other young men will hear my story and understand the monumental importance of the moment.

I want to share with any man, any father facing an unplanned pregnancy:

At conception a spark of life, part of your DNA, is growing in the lady you pursued, you cared for, and loved. Don’t abandon her and your baby because it’s inconvenient, because it’s hard. They need you now more than ever. Don’t look back on Father’s Day when you’re 60 and wonder what could’ve been, what should’ve been. What would’ve happened if you had chosen to support your lady?

God calls us to lead. THIS is the time when you must lead.