In the Tomb with Lazarus: Jesus and the Sacredness of Life

The stage seems set for a dramatic moment in Christ’s ministry. He had been traveling from town to town, alternately threatened and worshipped, performing miracles and stirring up controversy. And he is headed towards Jerusalem, for a final supper and a terrible day filled with unspeakable horrors, Good Friday.

Yet the relentless appr 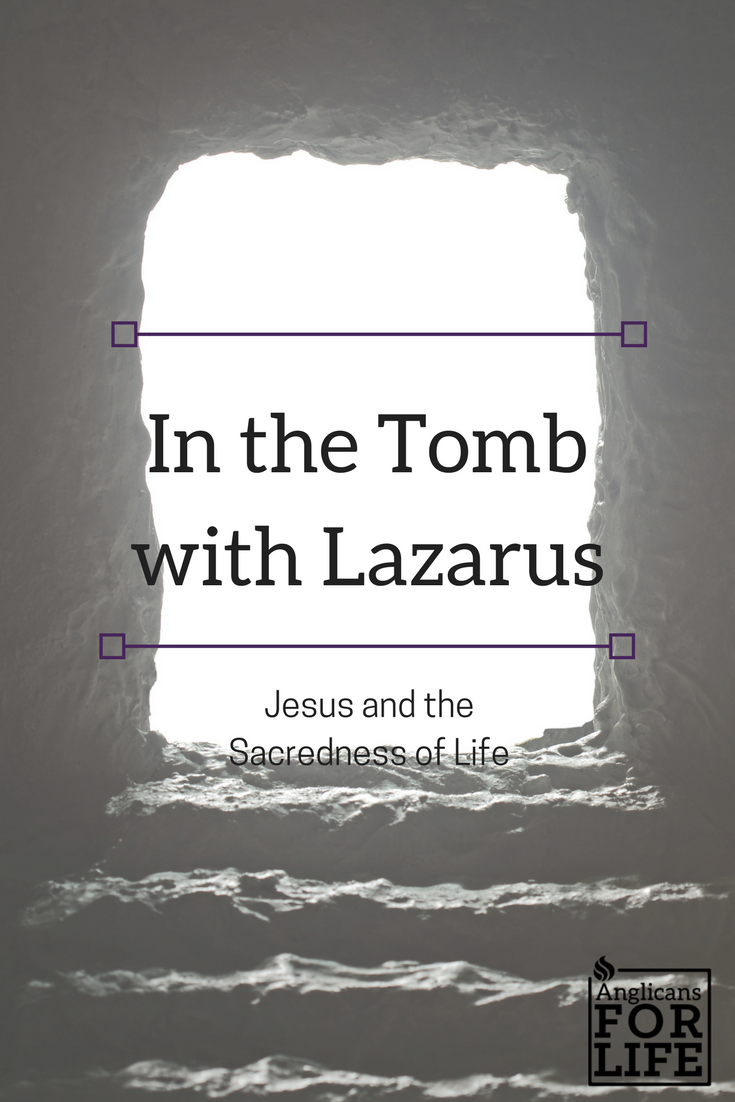 oach to Christ’s death and resurrection is interrupted by what seems to be an oddly personal moment. In the Gospel of John, Jesus is contacted by sisters Mary and Martha, who are seeking healing for their ailing brother, Lazarus. Christians, long familiar with this story, know what will happen to Lazarus. But, as we anticipate celebrating Easter this week, I want to look again at what the story of Lazarus’s resurrection means for us as Christians today. How does this story point to Christ’s ultimate sacrifice and what does it tell us about the sacredness of Life?

Death is an Enemy to be Defeated

The worst thing to hear at a funeral is that death is natural. “It’s all the circle of life.” No. Death is not natural, and it was not God’s purpose when we were created. Death is the effect of sin. As God drove Adam and Eve from the Garden, He proclaimed, “By the sweat of your brow you will eat your food until you return to the ground, since from it you were taken; for dust you are and to dust you will return.” (Genesis 3:19) Because of sin, death has become normal. But that does not make it natural or good. In fact, death in Scripture is even described, not as a necessary evil, but as an enemy. “Then the end will come, when he hands over the kingdom to God the Father after he has destroyed all dominion, authority and power…The last enemy to be destroyed is death.” (1 Corinthians 15:26)

But, in the story of Lazarus, Christ demonstrates the enmity, the wrongness of death, in a remarkably human way: he grieves. “When Jesus saw her weeping, and the Jews who had come along with her also weeping, he was deeply moved in spirit and troubled. ‘Where have you laid him?’ he asked. ‘Come and see, Lord,’ they replied. Jesus wept.” (John 11: 33-35) Even though Christ knows that he is going to raise Lazarus from the dead (John 11:4; 12-15), he mourns a life lost to the enemy, death. A life lost is a life worth mourning.

Christ’s Authority and Power over Death

The Gospel of John packs a lot of tension in this chapter. Three times, Jesus is confronted by those who loved Lazarus. “Lord,” Martha says to Jesus, “if you had been here, my brother would not have died.” (John 11:21.) Mary also makes the same statement, and members of the crowd are contemptuous—a man who healed the blind wasn’t there to save his friend. What all these speakers have in common, however, is the confidence that Jesus Christ could have saved Lazarus. No doubt having witnessed his miracles, Martha, Mary, and the crowd believed in Christ’s abilities to thwart the power of death.

But the true extent of Christ’s authority over death is only evident a few chapters later, after the cross. Christ, God in human form, was confined to the human body and killed by the cross—but only so that he could ultimately defeat it. “Since the children have flesh and blood, he too shared in their humanity so that by his death he might break the power of him who holds the power of death—that is, the devil—and free those who all their lives were held in slavery by their fear of death.” (Hebrews 2:14-15) But Christ’s victory over death meant more than just His resurrection—it means our own. “Where, O death, is your victory? Where, O death, is your sting?” (1 Corinthians 15:55)

Christ is the Opposite of Death

The Gospel of John is unique for having some of the most profound and theologically-rich statements about the nature of Christ and who he is—but all of them show that he is bringing Life. “When Jesus spoke again to the people, he said, ‘I am the light of the world. Whoever follows me will never walk in darkness, but will have the light of life.’” (John 8:12) As well as the light of the word, he also famously declares himself as the way, the truth and—you guessed it—the life. (John 14:6) Still, one of the most beautiful statements that Christ makes about his purpose and nature is in the chapter about Lazarus. When Jesus tells Martha that her brother will rise again, you can almost see her gather herself together in the midst of her grief, take a deep breath, and affirm that she knows that he will be resurrected on the last day. But Jesus is not there to offer comforting platitudes. He warmly replies: “I am the resurrection and the life. The one who believes in me will live, even though they die; and whoever lives by believing in me will never die. Do you believe this?” (John 11:25-26). Christ isn’t just like life—He is the embodiment of life.

This is, ultimately, how the Church can see the value that God has placed on Life. It is sacred because of Christ, because God has declared us sacred, through the sacrifice His Son. As we look to the celebration of Easter and Christ’s victory over death, may we remember the example he showed us with Lazarus. May we mourn for lives lost—because they have value. May we have faith in Christ’s power over sin and death. And may we value the lives of all people, the unborn, the elderly, and the vulnerable—because he died so that all may believe, be saved,—and live.