“Again, truly I tell you that if two of you on earth agree about anything they ask for, it will be done for them by my Father in heaven.  For where two or three gather in my name, there am I with them.” (Matthew 18: 19-20)

Where two or three are gathered in His Name, there God will be.  I have heard a few interpretations of what this Scripture means.  Based on what Christ is discussing earlier in the passage, He could be talking exclusively of the power of prayer.  Others have suggested that Christ is referencing the 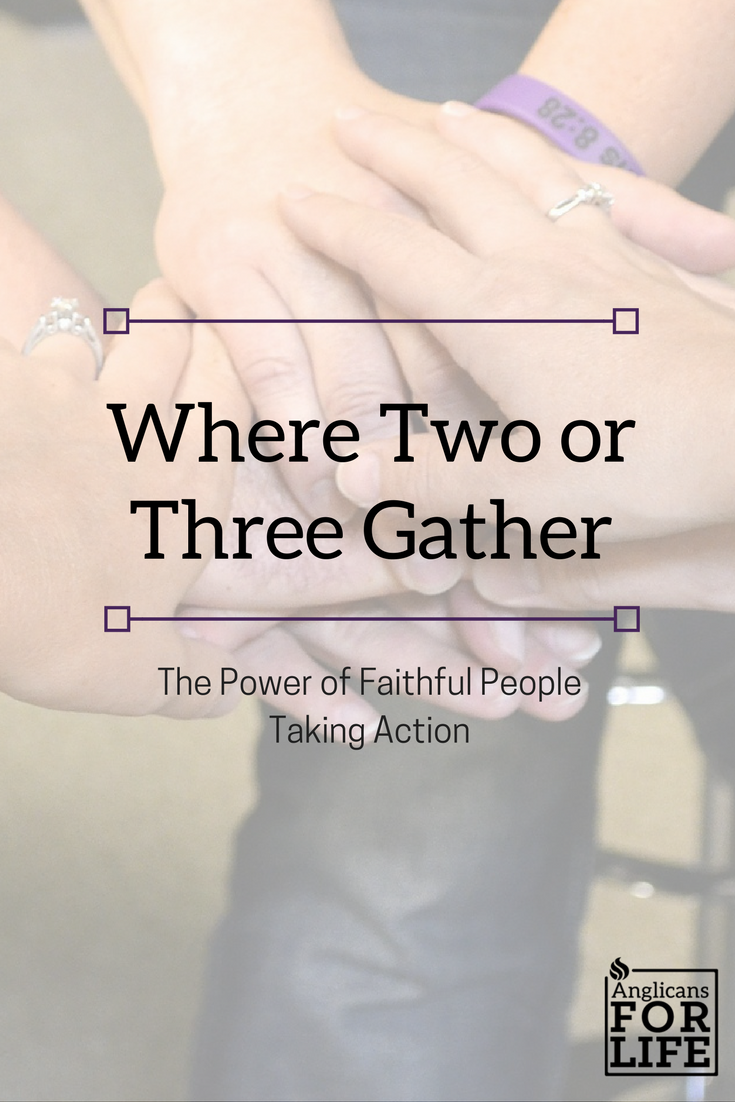 Church, and that God will be among all congregations gathering together in His name—whether they have huge numbers of parishioners or are a home church.

But I think Christ’s meaning is broader than just prayer and Sunday services.  Where two or three gather in His name, to be obedient to God’s calling for their lives…so will He be.  Whether that takes us to homeless shelters, hospitals, or abortion clinics, where two or three faithful people are gathered, desiring to obey and glorify God, He will be present in their efforts!

Take comfort in this—I do.  So often in life-affirming ministry, we can feel like we are alone, as if we are a lone voice crying out to no one.  But God does not require you to save the world—that’s His job.  Your job is to be faithful in what you can, even if your numbers are few.

To further encourage you, there have been two great examples of individuals and small groups of people striving to protect and honor Life.  They were seemingly outnumbered, but through them God did amazing things!

On November 6th, the effort to legalize assisted suicide in South Dakota was squashed.  The assisted suicide lobby was short 13,781 signatures, which were needed to have assisted suicide added to the ballot in 2018.  Their efforts failed, in a large part, due to the hard work of one man, Dr. Fred Deutsch, of Watertown, SD.

Dr. Deutsch worked with a board of current and former South Dakota legislators and recruited election-law lawyers to help navigate the legal aspects of South Dakota’s election process.  His group of supporters spoke at homes, businesses, community groups, political meetings, church groups, medical doctor groups, and local coffee meet-and-greets to educate the people of South Dakota about the horrors of assisted suicide legislation.  His efforts and the work of those who passionately supported him paid off.    The elderly and vulnerable in South Dakota are safe!

A few states away, around the same time, a group of concerned parents were taking on Planned Parenthood, the biggest abortion provider in the United States.  Spokane Public Schools had been considering using Planned Parenthood’s sex education curriculum, Get Real, for its middle school students.  This would be understandably alarming to parents, as the curriculum has a number of disturbing problems.  For one, abstinence is downplayed as “an” option to prevent pregnancy and STDs/STIs, as opposed to the only 100% effective one.  Secondly, whether or not a student plans to engage in sexual behaviors or not, they are required to not only participate in the lessons but, as a final project in the curriculum, to research the sexual health services in their area and report on the location, cost, and process of scheduling an abortion appointment.  That will directly lead them to their nearest Planned Parenthood, in what is an utterly shameless “product placement.”  I’m sure it goes without saying that pregnancy resource centers aren’t included in this curriculum as resources, either.

Thankfully for middle school students in Spokane, WA, after 500 people sent emails in protest, the school board rejected the curriculum.  Spokane schools are not alone—schools in Pennsylvania and Michigan also considered using Planned Parenthood’s sex education curriculum and were stopped by concerned parents.  Their example is both courageous and hopeful—abortion has not been accepted and normalized for all students and their parents.  Life-affirming people faced a million dollar abortion industry and won!

In sharing all this, I will also say that God’s will is mysterious—some of our efforts, however commendable, will not succeed.  The reasons for that are His alone.  But that does not mean that we cannot take action and do what is right.  He has promised us that when two or three will gather in His name He will come…and He will bless those that stand for Him!  Just as Dr. Deutsch in South Dakota and the parents of students attending Spokane Public Schools committed to doing what was right, imagine what God can do with your faithfulness.