And this is the testimony of John, when the Jews sent priests and Levites from Jerusalem to ask him, “Who are you?” He confessed, and did not deny, but confessed, “I am not the Christ.” And they asked him, “What then? Are you Elijah?” He said, “I am not.” “Are you the Prophet?” And he answered, “No.” So they said to him, “Who are you? We need to give an answer to those who sent us. What do you say about yourself?” He said, “I am the voice of one crying out in the wilderness, ‘Make straight the way of the Lord,’ as the prophet Isaiah said.”

(Now they had been sent from the Pharisees.) They asked him, “Then why are you baptizing, if you are neither the Christ, nor Elijah, nor the Prophet?” John answered them, “I baptize with water, but among you stands one you do not know, even he who comes after me, the strap of whose sandal I am not worthy to untie.” These things took place in Bethany across the Jordan, where John was baptizing. 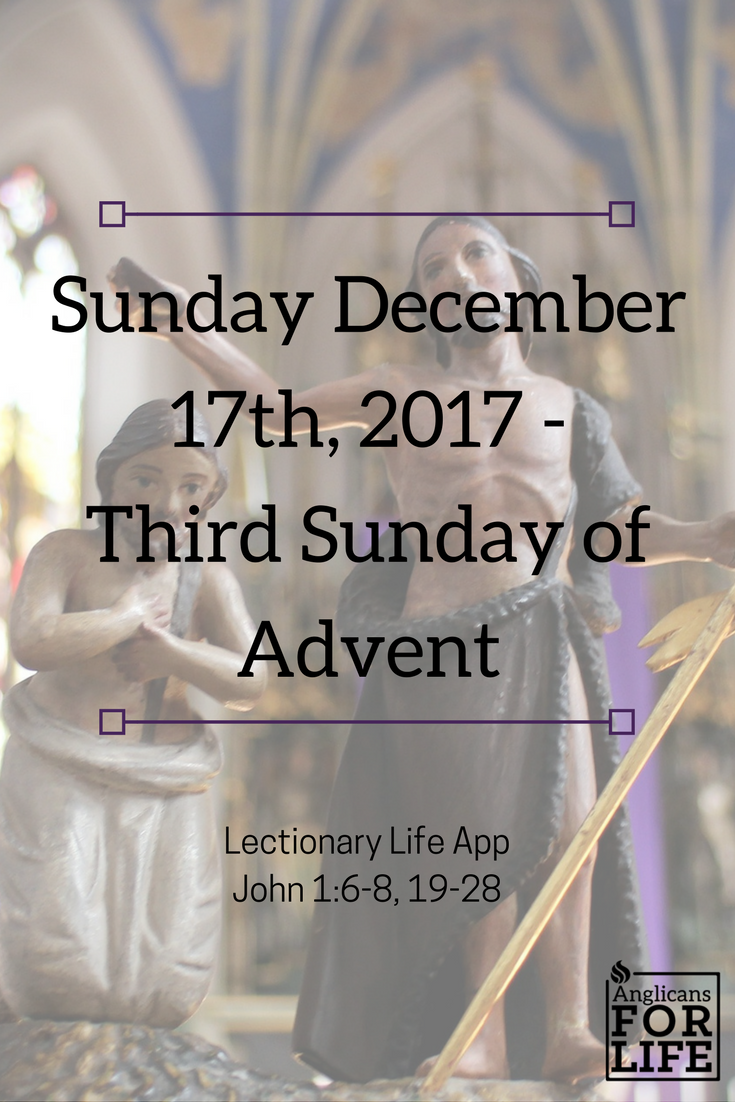 The Scripture readings for the first two Sundays of Advent focused on the importance of being prepared for the still to be fulfilled promise of Christ’s second coming. Today, in the Gospel of John, one of Jesus’ disciples, we focus on preparing our hearts for the commemoration of the remembrance of God’s promise fulfilled over 2,000 years ago. This fulfilled promise was the miraculous virgin birth of Jesus Christ. As John records, “In the beginning was the Word, and the Word was with God, and the Word was God.” (John 1:1) And, “The Word became flesh and made his dwelling among us.” (John 1:14a)

Now, in those days John the Baptist was sent by God as a witness to testify about Jesus Christ so that all who would hear John’s testimony might believe. It is interesting to note that the words of John the Baptist were only one part of his witness pointing to the light of the world, who was now in the world. It was the lifestyle and actions of John the Baptist that caused the Jews in Jerusalem to send priests and Levites to ask John who he was. The Jews actually thought John was their Messiah Savior sent by God, but John denied he was the Christ. Frustrated, the priests and Levites asked John who he thought he was. “John replied in in the words of Isaiah the prophet, I am the voice of one calling in the desert, ‘Make straight the way for the Lord.’” (John 1:23)

Last week we spoke about Psalm 139:16, “…your eyes saw my unformed body. All the days ordained for me were written in your book before one of them came to be,” as a witness to God’s sovereignty in this fallen and depraved world. I want to challenge us all to reflect deeply on the spiritual aspects of John the Baptist’s lifestyle and how we may apply it to our way of life. I believe God continues today to call us to prepare our hearts and the hearts of those in our congregations for both the fulfilled and yet to be fulfilled promise of the arrival of Jesus.

John the Baptist lost his life because he spoke the truth. Many people responded to this truth by turning from their sins and allowing John to baptize them as a sign of their repentance. Speaking the truth today with the boldness of John the Baptist can and does cost Christians their very lives. The chairs in our churches are filled with people of all ages, shapes, and sizes having one thing in common – they all are struggling with some form of sin, pain, guilt, or grief.

This Advent season, will we preach with the boldness of John the Baptist and, in the words of Alister McGrath, persuade “people there is a door to another world – a door that perhaps they never realized existed” to help “people to open that door and enter in to the world that lies beyond” (Alister McGrath’s Mere Apologetics)?

There is a world that is full of hope, healing, and light that can never be extinguished by the darkness of the ever present evil around us. Jesus Christ is the Creator of Life, and His life brings light to our families, communities, places of work, and the whole world, so we can see ourselves as we really are…sinners in need of a Savior. When we allow the light of Christ into our lives, Jesus will light the path ahead of us and remove the darkness of sin from our lives.

In the words of the prophet Isaiah, “Make straight the way for the Lord,” the Word becoming flesh and dwelling among us, God incarnate.