Going Back to the Basics – What Do the Scriptures Say About Life?

“The Bible doesn’t say anything about abortion.”   Have you heard this before?  I have as well—and they aren’t entirely wrong.  Moses was not given an 11th commandment condemning euthanasia.  Jesus did not address abortion in His Sermon on the Mount.   But just because “abortion,” “assisted suicide,” and “euthanasia” aren’t specifically addressed in Scriptures does not mean that we aren’t without guidance.  In fact, in nearly every book of the Bible, we are commanded to protect and honor God’s most precious gift to 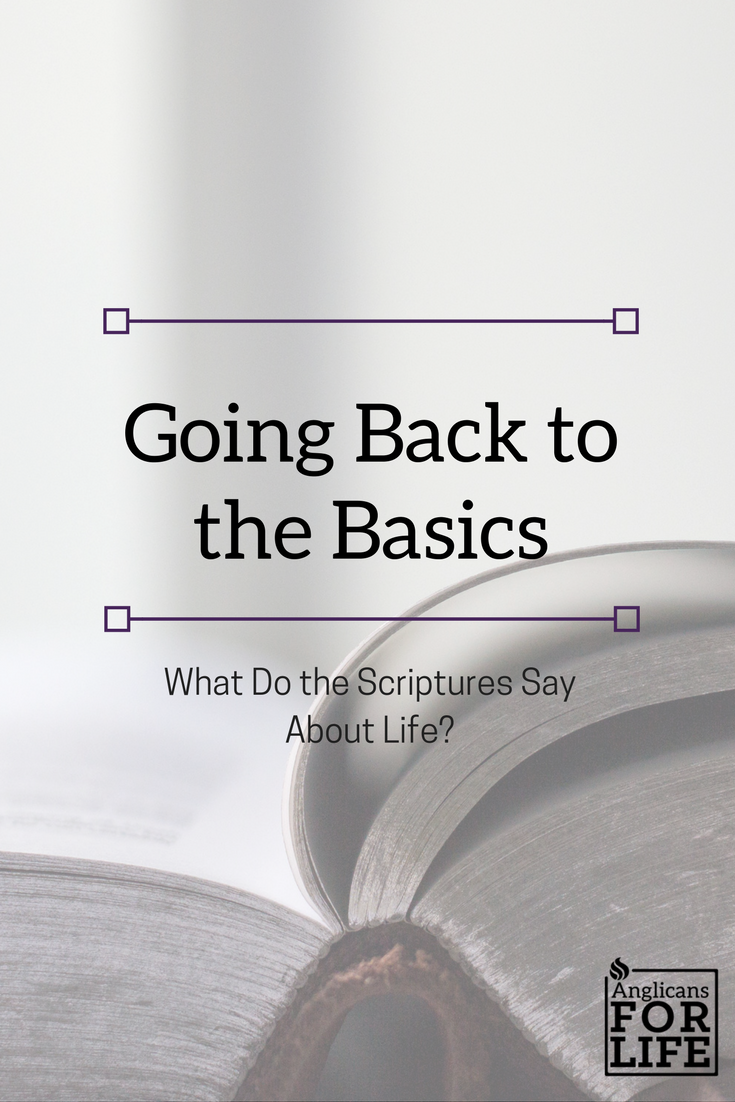 us—Life!  As we enter into this busy January season, anticipating the March for Life in DC, the Walk for Life in San Francisco, and the hundreds of marches and events nationwide, let’s delve into God’s Word and remind ourselves why we stand for the unborn, the elderly, and the vulnerable.

The sanctity of Life began as far back as the creation of the world and of man.  After God made the earth and sea and animals, He made his final and greatest creation—us.  “So God created man in His own image, in the image of God he created him; male and female He created them.”  (Genesis 1:27)  Adam and Eve were not modeled after animals or the earth.  They were modeled after the almighty, eternal God.

But Adam and Eve weren’t the only ones created in the image of God.  We, imperfect and sinful, are still Imago Dei and are uniquely modeled into being by God.  “For You created my inmost being; You knit me together in my mother’s womb. I praise You because I am fearfully and wonderfully made…When I was women together in the depths of the earth, Your eyes saw my unformed body. All the days ordained for me were written in Your book before one of them came to be.” (Psalm 139:13-16)  What an amazing thing to contemplate—that we were made by God in His image, while we were still unborn children in the womb, and that He know us so intimately, so perfectly!  Believing this, how could anyone argue that abortion is anything but an immoral act?

Life is Valuable Because We are God’s Creation

While the Scriptures are quite clear that God is our Creator, what we need to understand is what that means for us as His creation.  He isn’t an indifferent creator.  He is a perfect God who loves what He has created!  “Know that the Lord is God. It is He who made us, and we are His; we are His people, the sheep of His pasture.” (Psalm 100:3)  All of creation is under His complete control and authority.  But the oceans and the mountains and the lions and the elephants, while all magnificent, aren’t His people.  He didn’t create us and say, “Well, now you’re on your own.”  The Lord is our God, and we are His people, we to whom He has given Life!  Our lives have value not because they are ours but because they are His.

The Scriptures also reminds us about the value of our lives, since we have both been created by God and redeemed by Jesus.  “Do you not know that your body is a temple of the Holy Spirit, who is in you, whom you have received from God? You are not your own, you were bought at a price. Therefore, honor God with your body.” (1 Corinthians 6:19-20)  You are not your own.  Because our lives have value, because they have been created and redeemed by God, we must live our lives, first and foremost, giving glory to God and living in His statues.  In this way, Scripture rather firmly contradicts the “my body, my choice” mantra of abortion and assisted suicide supporters.

Because Life is Valuable, We Must Protect It

Because our lives have value, we as His people are called to protect and honor all Life.  The clearest evidence of this is in the commandment, “You shall not murder.”  (Exodus 20:13)  But even earlier, in the book of Genesis, God declares that the spilling of man’s blood is inherently wrong, due to our status as God’s beloved people:  “Whoever sheds the blood of man, by man shall his blood be shed; for in the image of God has God made man.”  (Genesis 9:6)

True, most people, Christians or not, believe that murder is wrong or at least a social evil.  However, Scriptures show that “valuing” Life goes beyond avoiding the act of killing.  Honoring the sacredness of Life means serving those in need and sharing the love of God.  Christ demonstrates how we should do this: “For I was hungry, and you gave me nothing to eat, I was thirsty, and you gave me nothing to drink, I was a stranger and you did not invite me in…Truly I tell you, whatever you did not do for one of the least of these, you did not do for Me.” (Matthew 25:41-45)  Being a life-affirming Christian means more than opposing death—it means serving those who are hurting, lonely, and broken.  It means caring for the “least of these,”—the unborn, the homeless, the single mothers, the elderly, and the handicapped.  Because our lives are valuable to God, so theirs must be to us.

God didn’t “forget” to talk about abortion, assisted suicide, or euthanasia in the Scriptures.  The gift of Life is proclaimed in all of God’s commands, in everything that God has created, including us!  May the promises of God and the importance of Life be written in our hearts as it is written in His Word.

For we are God’s workmanship, created in Christ Jesus to do good works, which God prepared in advance for us to do. (Ephesians 2:10)