Thankful: One Family’s Legacy of Adoption

As we give thanks this Thanksgiving season, I can’t help but take a look back at the legacy of life in my family and be thankful for it. Ironically, or more likely due to God’s wisdom, November is National Adoption Awareness Month. What an honorable, incredible thing for which to give thanks!  It touches my life very closely, as adoption has been a huge part of my family’s legacy for generations. 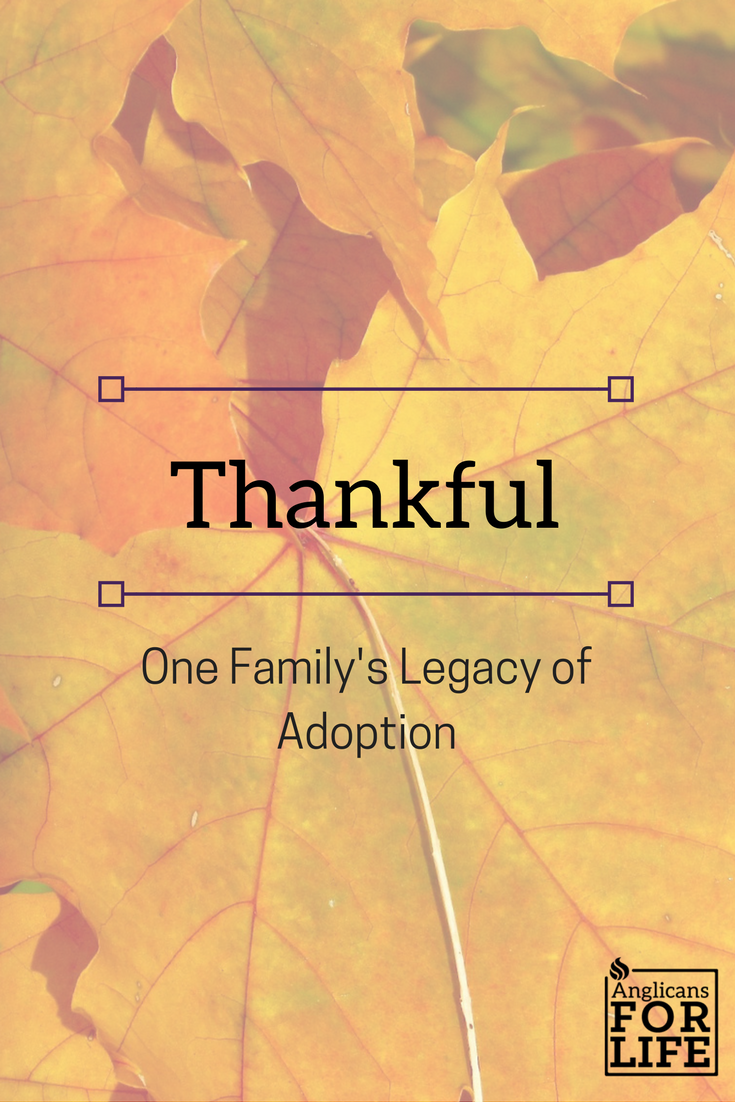 In December of 1965, my grandparents met their daughter for the first time – my mother. She was placed for adoption by her birth mother who, for the sake of privacy, we will call Nancy. Nancy had found herself pregnant at the age of 17 and did not feel equipped to be a mother, as she had just started college. Perhaps reluctantly, she decided to opt for adoption, and, through an adoption agency, found my grandparents.

Unfortunately, it wasn’t long after arrangements were made that Nancy had second thoughts. My grandparents got a distressing call that Nancy had gone missing. It was days before she was found – across the border in Mexico, where she had hoped to obtain an abortion. Nobody knows the exact circumstances surrounding her decision to flee; we can only be thankful that she was found in time, as she was less than 24 hours away from the scheduled abortion. God was gracious to her and saved her from a lifetime of regret and grief over her lost child. With the support of the adoption agency and her attorney, Nancy decided that she didn’t want the abortion. She chose life for her child.

Adoption has always been a large presence in my life, and the Lord has put it on my heart to adopt from a very young age. I’ve been immensely blessed to have married a man that also feels deeply called to adoption; he and I recently went to an adoption workshop, just to learn more about the process so that, when the time comes, we will know where to start. During that workshop, I heard some of the most painfully beautiful stories of redemption, loss, love, and perseverance. One woman said something that I will never forget. “Adoption always means that there has been a tragedy.” By this, she meant that we need to celebrate adoption, as we have been adopted into Christ’s family (Romans 8:14-17). But adoption also means that a loss has occurred. In order for one mother to adopt her child, another mother must surrender her rights as a parent. That mom who has placed her child will always be a mom, but a mom with empty arms. She won’t look like the “typical” mom, with a smattering of sticky hand prints on the windows in every room of the house and snacks and sippy cups strewn all over the floor. No, this mother is silent and lonely, perhaps wondering about the child she placed for adoption.

While we celebrate that these mothers have chosen life for their children, we also must not overlook the hurt that they experience after making that decision. I imagine that Nancy suffered in this way. Perhaps that’s why she fled to Mexico in the hopes of having an abortion. We may never know her fears or thoughts during that time in her life. What I do know is that I’m infinitely grateful for her sacrifice. Without it, I wouldn’t be here to share her story, and the story of my own mother.

My mother, Rhonda, grew up in a stable, loving home with two brilliant people: my grandparents. She was granted a wonderful childhood with many opportunities, went to college, met my father, married, and had my sister and me, twin girls. It was shortly after our birth that dear friends of my parents, who we will call Ryan and Tina, shared some news: They were unable to have children biologically. In the hopes that my mother could shed some light on adoption, Tina pleaded with my mom to talk with Ryan about the topic. He struggled deeply with the idea of raising “somebody else’s child.” He wondered if his love for an adopted child would be as strong as his love for a biologically conceived child, a question that I suspect many prospective adoptive parents have. It was my mother who was able to minister to him, to share this truth: It doesn’t matter how God gives you children and having different DNA doesn’t matter. They are your children. You will be the one that they run to when they are scared at night.  You will be the one that they call “mom” or “dad.”  Ryan’s heart began to soften, and through prayer and conversation, he and Tina decided to begin the adoption process.

Months went by, and my mother learned of a young woman, named Kelly, that had recently found out that she was pregnant and planned to have an abortion. The parallels between this woman and Nancy was striking to my mom, and she felt led by the Lord to reach out. It was obvious that abortion was not what Kelly truly wanted, but she felt that she had no other options. Though it felt like a risk, my mother asked her if she had ever considered adoption, mentioning that her friends were looking to adopt. It was as if a wave of relief came over Kelly as she considered the life that her unborn child could have. She canceled the abortion that day and committed to the adoption with nervous excitement.

With my mother at her side, Kelly got to meet Ryan and Tina. The typical adoption process began with much paperwork, legal jargon, and formality, but quickly transformed into a relationship between the adoptive parents, birth mother, and my mom. Ryan and Tina committed to helping Kelly get to and from her doctor’s appointments and providing anything else that she needed from them. The relationship was strong.

Not all stories end the way that we hope, however.

When the time came for Kelly to deliver, she called my mom and asked her to join her at the hospital. My mother knew something was wrong when she got to the hospital. Something in Kelly’s demeanor had changed.

Ryan and Tina were out in the waiting room, with a car seat, diaper bag, and their hearts ready to burst with anticipation. When my mother had to break the news, they looked as if they might shatter. For them, this was the end of their joy. It was a brutal blow, yet somehow bittersweet to see Kelly taking the role of the mother, the role that she had been prepared to give up. It was the beginning of her joy, in the midst of their sorrow. Ironically, or more likely due to God’s wisdom, the roles had been reversed.

It’s incredible to see the legacy of life in my family, and in the families that surround my family. Through my mother’s life, the Lord saved Kelly and her child and opened the hearts of Ryan and Tina, who went on to adopt five beautiful children.  Through my grandmother’s life, not only was my mother  blessed to have loving adoptive parents but my sister and I were blessed to have loving grandparents. And through the lives of both of these women, my soul has been fervently urged toward adoption.

But where did this legacy start? It started with Nancy. It started with a woman that I will probably never meet, a woman whose face I will never see. She chose life for her child and changed the course of my family forever. That’s what I am thankful for this Thanksgiving. That God works in mysterious, sometimes painful, but ultimately perfect ways for His glory. What more could we ask for?

“For I know the plans I have for you,” declares the Lord, “plans to prosper you and not to harm you, plans to give you hope and a future.” (Jeremiah 29:11)