But we do not want you to be uninformed, brothers, about those who are asleep, that you may not grieve as others do who have no hope. For since we believe that Jesus died and rose again, even so, through Jesus, God will bring with him those who have fallen asleep. (1 Thessalonians 4:13-14) 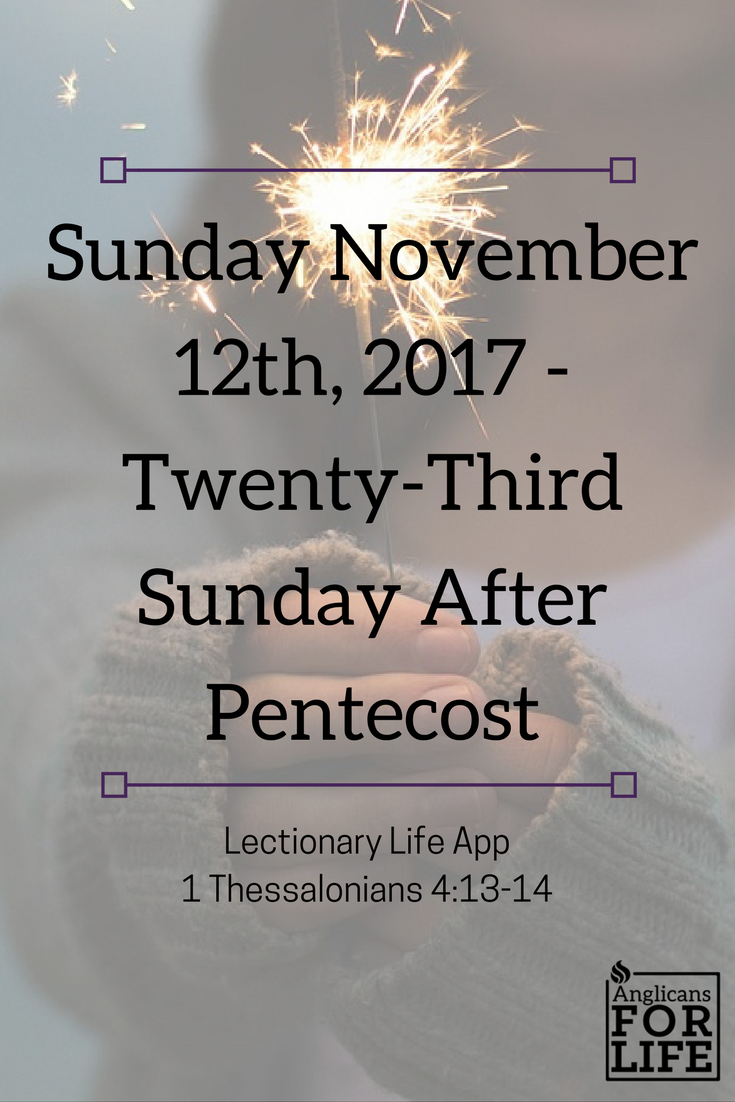 There is nothing like abortion. Forty-four years since abortion on demand was granted legitimacy by the Supreme Court, it is still highly divisive, and no middle ground has been discovered. There are several reasons for this, but let me suggest two related ones: abortion is personal, and it involves death. Generally speaking, the instance of abortion intimately involves a mother carrying a child she wishes she weren’t, who undergoes a “procedure” (a tidy and convenient term) that can never be taken back. It is no surprise that many women grieve terribly over their abortions. Despite pro-choice evasions, mothers love their children and grieve when they are no more. This puts those who have been involved in abortion in an untenable position—either face having participated in a death that can never be undone or somehow deny the death of her child.

In the passage quoted above, Paul gets to the heart of this matter. Writing of those who grieve, he makes a crucial distinction between two types of grief: hopeless grief and hopeful grief. The difference? Those who grieve without hope see death as final. Those who grieve with hope do not. Both kinds of grief are real grief, but the character of each is different. One sees nothing but darkness, while the other, in the midst of pain, anticipates light.

Here Church has a voice that can be found nowhere else. The whole Christian faith rests upon the conviction that God is sovereign even over death, and therefore death need not be permanent. In fact, the simple claim of the New Testament is that, because Jesus died and was raised from the dead, those who die in Christ will also be raised from the dead. The resurrection of Jesus takes this from wishful thinking to solid hope. It is because death is not final that the Scriptures speak of death as sleep. And believing that takes the sting out of death. That does not mean that those who believe that escape the pain that comes with death. But the pain is different. Pain is always painful, but it is not always dark.

While the Scriptures do not deal explicitly with what happens to infants when they die, there are good grounds for believing that the Lord takes them to Himself. And I suspect that there are many women—and men—who are either deeply grieving or avoiding their grief who need to hear precisely this. It is good and right to speak of God’s eagerness to forgive the sin of abortion. Yet as crucial as those words are, words of forgiveness cannot bring the baby back. But God can. Not here and now, but one day. Perhaps there are women and men who have held God at arm’s length and haven’t been able to receive peace, forgiveness, and healing because they believe that their babies are forever lost, and who need to hear that God has not forsaken their babies.

The world will laugh at the notion that the dead will rise, as it laughed at Jesus before he raised a little girl from the dead (Mark 5:39). It nevertheless remains a word that many are desperate to hear. Especially those who now grieve without hope.

Lord, we ask for mercy for those who grieve past abortions. Comfort the women who regret their abortions and the men who mourn their lost fatherhood. Give them hope not in the things of this world but in their future home in Heaven. Bring them peace in knowing that their children are safe in Your Loving Arms. We ask these things in Your Name, Amen.