The other day I was scrolling through Facebook and this title jumped off the screen: End-of-life chatbot can help you with difficult final decisions.

Given Anglicans for Life’s work to prevent euthanasia and assisted suicide, while upholding the dignity of every human being at the end-of-life, the topic imme 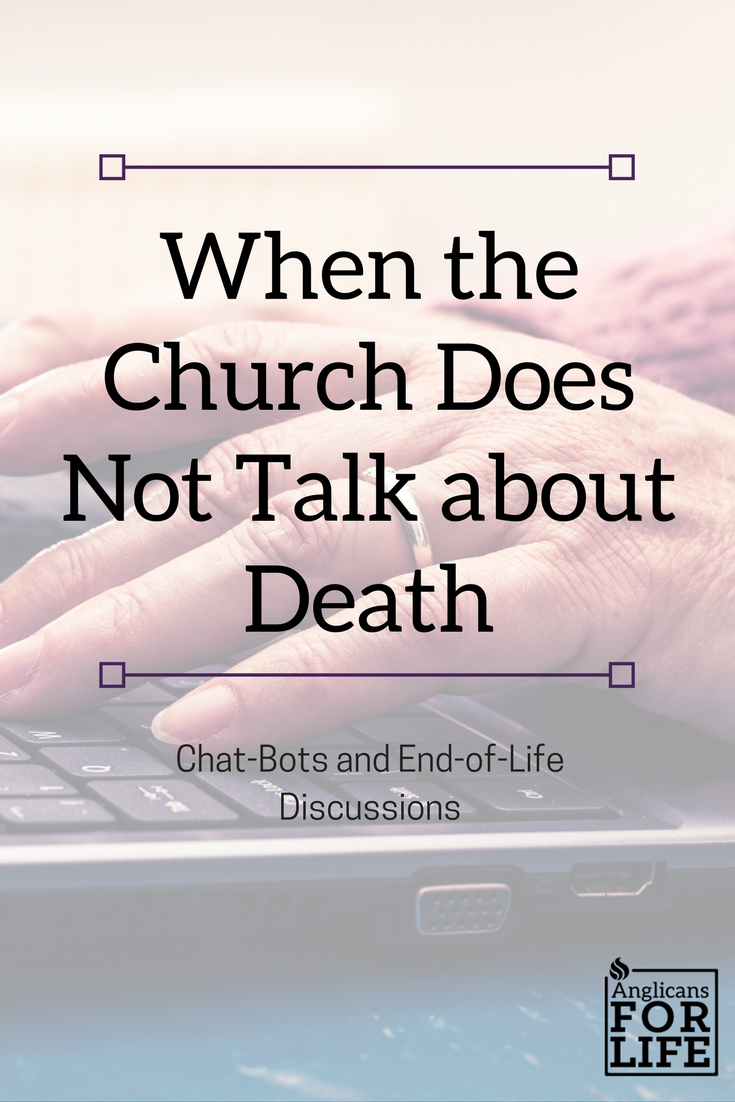 diately caught my attention! I thought, “Wow, people are recognizing the importance of discussing the difficult topic of death with Jewish rabbis.” In my mind, I somehow saw chatbot as sabbot, and thought it was a different name for wise Jewish religious leaders!

I was curious about the definition of this new title and google’d it. Imagine my shock when I went to type the word and realized the article wasn’t referring to conversations with religious leaders but with a ‘virtual agent,’ a robot!  According the Timothy Bickmore, Professor of Robotics at Northeastern University in Boston, Massachusetts, “People near the end of their lives sometimes don’t get the chance to have these important conversations before it’s too late.”  So Bickmore and his team – which included doctors and hospital chaplains – built a tablet-based chat-bot to offer spiritual and emotional guidance to people who need it. “We see a need for technology to intervene at an earlier point,” he says.

Once I got the real gist of the article I was dumbfounded that anyone would be okay with letting their loved one talk to a robot instead of a living, breathing, caring human being about their end-of-life fears, questions, and concerns. The chat-bot is not even designed to interact in a conversational way; it only asks people to choose options from a pre-written list of responses.  According to Bickmore, “An unscripted system might very easily get into situations where the agent recommends things that are dangerous.”

The article justified the need for chat-bots based on the growing popularity of programs like The Conversation Project which, according to their website, is dedicated to helping people talk about their wishes for end-of-life care.

Another program called Death Cafes confirms the interest people have in talking about aging and dying.  As per their website: “At a Death Café people, often strangers, gather to eat cake, drink tea, and discuss death. Our objective is ‘to increase awareness of death with a view to helping people make the most of their (finite) lives’. A Death Cafe is a group directed discussion of death with no agenda, objectives, or themes. It is a discussion group rather than a grief support or counselling session.” They also report that they have held 5,124 “death café” discussions in 51 countries since 2011 when they first launched.

One critical point that seems to be missing from these programs is recognizing how the participants’ differing ages will change the importance and immediacy of the topic. This is all theory for a 57-year-old (barring a terminal diagnosis).  But for an 87-year-old who is experiencing memory loss or other common challenges of aging, death is on the foreseeable horizon. The conversation is different and more relevant based on the physical impairments that come with age.

But beyond the matter of age is the issue of who is having these conversations! And where is the Church, God’s people, in these discussions? Given that eternal life, heaven and hell, reconciliation and redemption, and the Great Commission have been entrusted to us as Christians, shouldn’t we be leading these conversations?

Recently, AFL’s Carpe Diem June Newsletter featured the story of Fr. Chris Herman, Vicar of St. Lazarus Mission, a nursing-home based Church plant. He and his wife Carol discussed the fact that they have found the fields ripe for harvest as “age is the great equalizer” and that residents now have time to consider their sins and eternal resting place. They see about 45% of the residents coming to the Lord or recommitting their lives to Him, often based on conversations that started out discussing death or aging or concerns about either!

While death is an unknown which can cause us to fear it, discussion about it has the power to diminish its bite and open the door to honest, heartfelt conversations between family, friends, parishioners, and priests. I can recall how fearful I was to talk to my parents about the fact they would someday die, but after my mom died, those conversations brought me comfort knowing what her wishes were. My dad and I now regularly have informal talks about the reality that he will die (next May he will be 90), and just last night we discussed how and why he and we will know when it is time to give up his driver’s license.

Aging well and dying with grace is not for the faint-hearted. It can be tough, scary, and often unpredictable, but as God’s people we owe our brothers and sisters, fellow human beings, neighbors, friends, relatives, and yes, even strangers a willingness to enter into difficult discussions about our final days and the love of God.

Church, please don’t let the secular world highjack end-of-life discussions – this may be God’s last chance to bring His sheep into the fold. Anglicans for Life has a great resource in our Embrace the Journey 8-week curriculum that you can use in your church, bible study, family, or Sunday School class to facilitate these discussions amongst real people—and not chat-bots!