Ascending the Summit and Onward – Sending Anglicans into Action

In spring 2015, I was sitting at my desk across from Georgette’s in AFL’s office in Sewickley, PA. After a few moment of hesitation, she shared that she had been speaking with Bishop John Guernsey from the Diocese of the Mid-Atlantic (DOMA). He had a rather remarkable idea—if Anglicans could gather together for diocesan events, why couldn’t we gather life-affirming Anglicans in Washington DC for a conference, to correspond with the largest gathering of pro-life people of all denominations, the March for Life? 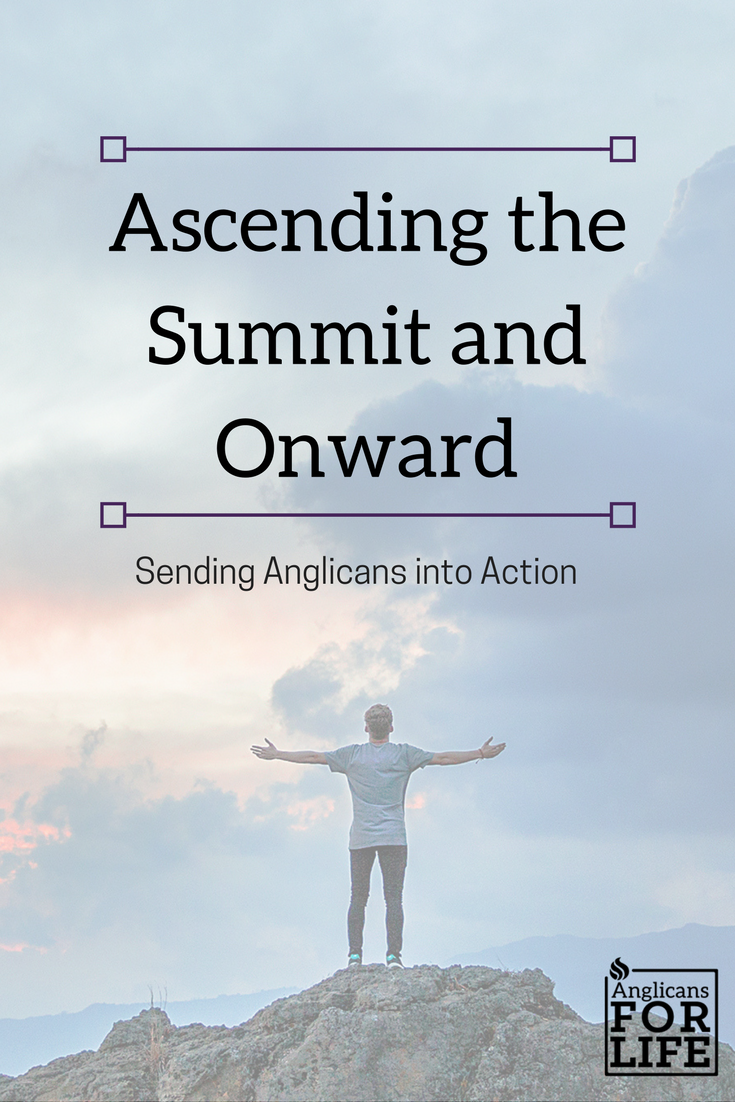 I’d like to say that I was excited about the idea. I wasn’t. My character is marked by pragmatism—I tend to lean toward caution, realism, and frugality. How on earth could we organize a conference from a completely different state? Could we find high quality speakers? What about the financing for such an event? Would anyone even want to come? Georgette was more optimistic than I was (not an uncommon occurrence!) but also had concerns. I admit I didn’t think it would go beyond a few phone calls with Bishop Guernsey and his team.

I evidently underestimated everyone involved. Bishop Guernsey and his DOMA team were ready and prepared to plan an event, and one by one my concerns were answered. Details were organized, speakers were found, the finances were provided, and people started signing up! Still, we didn’t want to raise our hopes too high—Georgette and I decided that if we had 75 people attend we would be content. Summit 2016 had approximately 115 people in attendance! We were amazed and grateful that God had inspired so many people to attend.

The high attendance was especially shocking considering the problem quite literally looming over the event—the weather. Snow-pocalypse, as we started jokingly referring to it, was scheduled to cause havoc for everyone traveling to the March. Bus trips were called off, and flights were delayed and ultimately cancelled. But we decided to carry on with the Summit and brave whatever conditions would find us. Thankfully, God was merciful and gave us a beautiful, clear day event.

Still, none of this would matter if the event didn’t leave an impact. We could have the best venue, food, and speakers, but if people didn’t leave the event feeling inspired to participate or start life-affirming ministries, it would all be for naught. Within the first half hour of the Summit, I knew that would not be a problem. John Stonestreet was our opening speaker, and the excitement and energy exuding from those listening was almost audibly crackling in the air. These weren’t Anglicans looking for a nice, feel-good conference—these were people who wanted to take action. It was nothing short of amazing, and it made even my stoic and logical little heart swell in delight.

After an astonishing if busy (read here: frantic) day for myself, Georgette, and the AFL and DOMA teams, we dove directly into the March for Life the following day. As many of you know, that led to a very, very snowy drive back to Pittsburgh for us, as well as 25 hours spent stuck on the PA Turnpike. The snow-pocalypse did catch up to us, but the success of the Summit made this frustrating experience far less dreadful.

As I returned to my desk and my normal schedule after the event, I thought that we could finally rest after all that planning and work and just return to “normal.” Imagine my surprise when a month or so later Bishop Guernsey and his team called to let us know that they wanted to hold the Summit again…next year! “Again?” I thought. Yes, again. And so we did. Summit 2017 had even more people attend, over 125.

So, here we are, looking forward to our third Summit on January 18th, 2018, an event that was born from what I thought would be a few insignificant phone calls.

Still, as much credit as I give to Bishop Guernsey and the DOMA team in inspiring and spear-heading these ventures, none of this would have been possible without life-affirming Anglicans who not only believe in the sanctity of life but want to do something about it. This event is not about self-congratulations or “preaching to the choir,” so to speak; it’s about preparing clergy and laity to go out and do the work that God has placed in their hearts, to care for the unborn, the elderly, and the vulnerable.

And now we’re sharing that opportunity with folks on the west coast. We are excited to share that, in addition to Summit 2018 in Falls Church, VA on January 18th, AFL and the Diocese of San Joaquin will be hosting Life Symposium 2018 in San Francisco, CA on January 26th. It will be an evening with two great speakers and a chance for life-affirming people on that side of the country to gather together before the Walk for Life. We ask for your prayers as we continue to organize and plan for both events in the coming months, that God would work in the hearts of His people to not only attend but to be inspired to serve Life!

Learn more about the Summit and the Symposium on our website and register today!