I appeal to you therefore, brothers, by the mercies of God, to present your bodies as a living sacrifice, holy and acceptable to God, which is your spiritual worship.  Do not be conformed to this world, but be transformed by the renewal of your mind, that by testing you may discern what is the will of God, what is good and acceptable and perfect.

We are in constant need of transformation, and our minds of renewal. Paul is speaking not to those outside the Church, but to those within.  Not only are we sinful, and therefore prone to believe what we want to believe, but we are influenced far more by the thinking and assumptions of the world in which we live than sometimes we know. 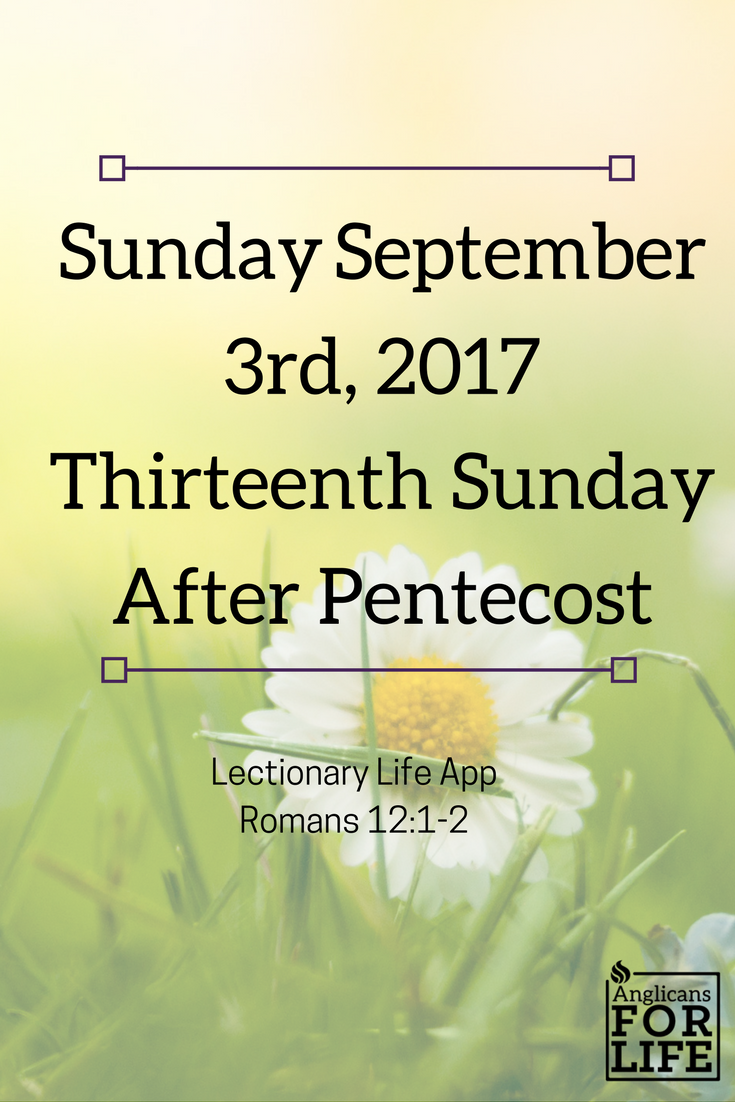 Examples are, of course, legion, but let me suggest one in the arena of life.  The promotion of sexual license in our culture rests upon two pillars: abortion on demand and contraception.  The Church, when it has been faithful, has rightly rejected abortion.  The ACNA, for example, has given a bold and clear position statement concerning abortion: “God, and not man, is the creator of human life. The unjustified taking of life is sinful. Therefore, all members and clergy are called to promote and respect the sanctity of every human life from conception to natural death.”  Contraception is a bit different.  Here the (Protestant and Anglican) Church is curiously silent.

If you don’t know the history, until 1930 Catholics and Protestants were united in opposition to contraception.  In 1930 the Anglican Church became the first to declare contraception legitimate.  The Anglican bishops at the 1920 Lambeth Conference warned against the evils of contraception: “We utter an emphatic warning against the use of unnatural means for the avoidance of conception, together with the grave dangers—physical, moral and religious—thereby incurred….” Yet in 1930 the Conference changed course: “Where there is a clearly felt moral obligation to limit or avoid parenthood, the method must be decided on Christian principles….” While the bishops went on to say that contraception was not to be used for reasons of selfishness, luxury, or convenience, the Christian principles that were to govern such decision-making were never given, nor was the reason for the change in position. It is noteworthy, however, that this took place during the time when people like Margaret Sanger (the founder of Planned Parenthood) were pushing birth control as a way to “free” women, particularly by releasing them from the possibility of unwanted pregnancy being imposed upon them, it was said, by their own biology. By the time the sexual revolution was in force in the US, contraception had become mainstream, largely accepted by the churches, and without mention of selfishness or convenience—and, curiously, without theological justification.

This is not the place to argue the point concerning contraception (I have argued it at length here). What I do want to note is that Protestant churches embraced contraception along with the rest of the world. The vision our culture came to embrace, given by Margaret Sanger and supported by the sexual revolution, is that sex should be available without consequences. Rather, sex is a choice, and one which everyone should be able to make without constraint (even the constraints of our own biology).  If we need to resort to contraception or abortion to make that choice, so be it.

What does all this have to do with Romans 12? In the end, our ability to see through the pattern of the world and be transformed by the renewal of our minds depends on our willingness to worship, to present our bodies as a living sacrifice, holy and acceptable to God. Presenting our bodies to Him means that we understand that we are not our own, that we submit our visions and desires to Him, even when they run against the grain of what we might think or want, and even when so doing is scary. In other words, worship is rooted in trust—that God created us, knows us, loves us, and that His ways are good, even when they are costly and when we might wish they were different. Apart from worship as understood, we will never be transformed or renewed in our minds.

The Episcopal Church and Anglican Church in North America (ACNA) continue to diverge in social policy and theological belief surrounding bodily a...

By: By Julie Grimstad I believe that unarmed truth and unconditional love will have the finalword in reality. This is why right, temporarily defe...