What About the Birth Parents? – Caring for Those Who Chose Adoption

When a girl finds out she is pregnant and doesn’t want to be, she quickly considers her choices; parent the child, abort the child, or place the child for adoption. Each option comes with consequences, the pros and cons for each choice are inventoried.

Given that I was in her circumstances and chose abortion, I can tell you 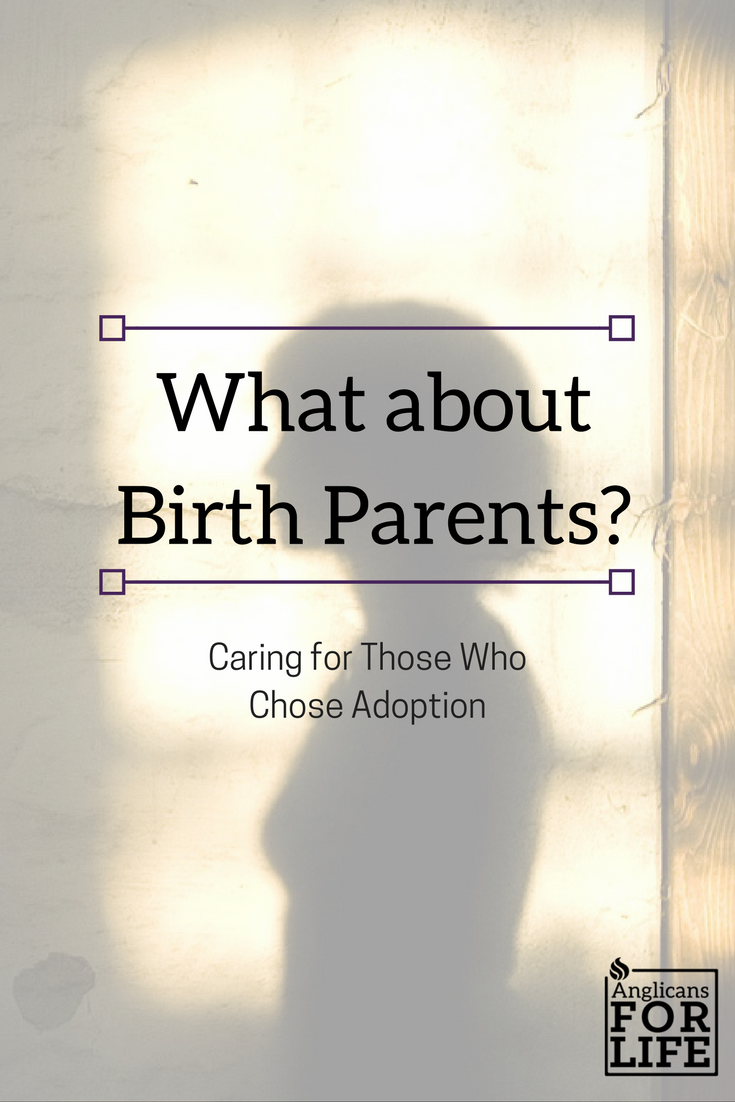 parenting or placing the child for adoption now seem like the only options we should offer her. I know the consequences of having an abortion, and I wouldn’t wish the lifetime of regret I feel every day on anyone. (I know I am forgiven, but I miss my child.)

Personally, as I look back, I wish I would have had the courage to place my child for adoption. I recognize and appreciate that neither I nor the father of my baby were mature enough to be parents so when I meet girls and guys who had the courage to go through the birth process and place their child with an adopted family, I look at them with awe and great admiration.

Adoption is also a hard choice and just today I read a blog that described the idea of adoption as “far worse to give birth to a child and release him or her into the uncertain fate of adoption.”  This isn’t an uncommon view.  I cannot tell you how many girls I have counseled who viewed adoption as abandonment of the child, justifying abortion as the lesser of two evils.

In our day to day work here at Anglicans for Life, it seems adoption gets the least amount of attention of all our life topics, yet we see it as the best alternative to abortion when parenting isn’t the solution. There is a great amount of support for adoption generally speaking, and if you are a child who was adopted or a family blessed to have an adopted child, you will typically be even more supportive of adoption.

Those are two common sides of the adoption coin.  But what about the birth parents?  How often do we hear what they think of adoption or do we consider their perspective?

A number of years ago, a teenage couple in our small town became pregnant and had the courage to make an adoption plan for their daughter. A few years later the young man, who was the father of the child placed for adoption came to our house. I hugged him and expressed my admiration for the choice he/they made. His response haunts me to this day. He got big crocodile tears in his eyes and asked if I wanted to see a picture of his daughter.  The adoption was open, and they got regular updates. He pulled a dogged eared picture out of his wallet and beamed as he showed me his beautiful daughter. Then he thanked me, and said that his family discouraged him from talking about the child.  It was the first time anyone had ever said anything positive to him about the whole incident.

Earlier this spring I got a call from a colleague in Indiana who asked me if there was a version of the Silent No More Awareness Campaign for birth parents. She had three young women who had placed their children for adoption but were struggling emotionally with sadness and grief.  I sent her four copies of Sharon Fox’s book, Reframing Adoption: a Christian-based Birthmother Grief Recovery Handbook and suggested she shepherd the girls through the book. I later had a chance to speak with the girls as they wanted to talk with me about starting a version of the Silent No More Campaign for women and men, birth parents, who had placed their children for adoption, in order to help other girls also struggling afterwards.

An important question for me was whether the adoption agency offered any counseling as I had remembered watching a video of birth parents discussing their feelings after the adoption, which had been produced by an agency. One girl replied to me that going back to the adoption agency brought back a lot of memories, and she couldn’t do it. I related to it as similar to my hatred for being at abortion clinics – the location of a trauma is often hard to re-visit.

We also discussed the differences and similarities of the emotional pain we each experienced as mothers who lost children to adoption or abortion. And, while they readily acknowledge their son or daughter is alive, they still grieve the loss of the child they bonded with during the months of pregnancy.

So, based on my anecdotal experiences, the question that lingers in my heart and mind is this – while we celebrate and encourage adoption over abortion – is there something more we as the Church can be doing to help the birth parents in our midst who may feel their adoption experience must be kept hidden along with their grief? Is there a ministry that churches can offer, using Fox’s book to address the grief, and give them a safe place to honor their pain, even while celebrating their courage? Feedback and comments welcome!